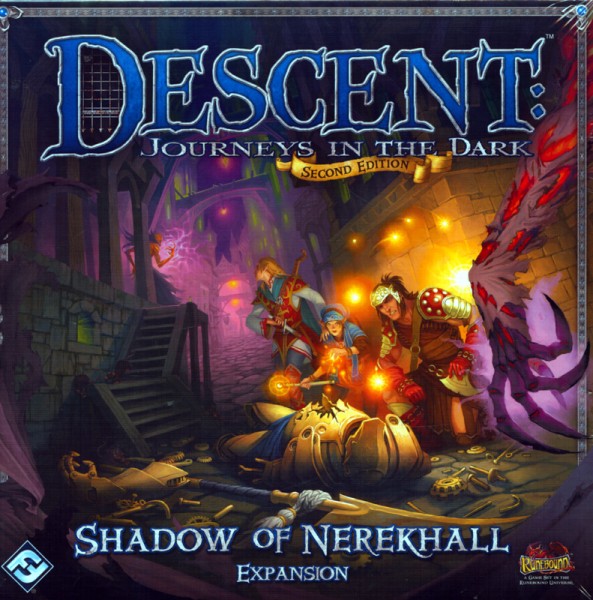 This product is currently not available.
Please inform me as soon as the product is available again.
€59.95 *

Recovered from its times of trouble and under heavy threat from the Daqan Lords, the city of Nerekhall stands firm in its declaration: “The shadow has passed.” Yet sinister forces continue to build strength within the hidden corners of the city. They prepare for the day soon to come when Nerekhall, the baronies, and all of Terrinoth will tremble before their might.

Shadow of Nerekhall is an expansion for Descent: Journeys in the Dark Second Edition, inviting players to enter the city of Nerekhall – a thriving town with an evil reputation. This expansion introduces new heroes, classes, quests, monsters, and more, as the heroes travel through the city, attempting to save it from the demonic creatures entering Nerekhall from the Black Realm.

Related links to "Descent 2nd Edition - Shadows of Nerekhall Expansion"
Product Information
Zu den Produkteigenschaften more
Close menu
Product information "Descent 2nd Edition - Shadows of Nerekhall Expansion"
Evaluations 0
Read, write and discuss reviews... more
Close menu
Customer evaluation for "Descent 2nd Edition - Shadows of Nerekhall Expansion"
Write an evaluation
Evaluations will be activated after verification.
Customers also viewed
Customers also viewed
Viewed
This website uses cookies, which are necessary for the technical operation of the website and are always set. Other cookies, which increase the usability of this website, serve for direct advertising or simplify interaction with other websites and social networks, will only be used with your consent.
Decline Accept all Configure