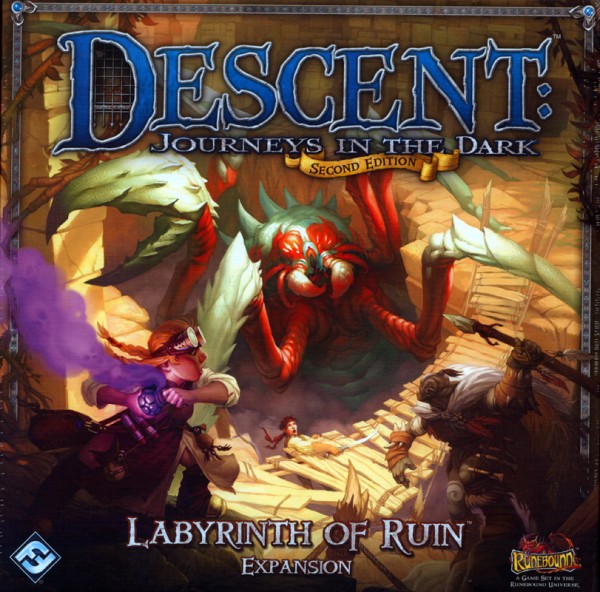 This product is currently not available.
Please inform me as soon as the product is available again.
€59.95 *

An ancient city full of peril and mystery awaits in the ruins of Sudanya, a lost civilization on the edges of Terrinoth. Horrid creatures haunt the heroes’ every step, but powerful allies will guide them through the twisting maze of wilderness and broken cityscape.

Labyrinth of Ruin is an expansion for Descent: Journeys in the Dark Second Edition that introduces an all-new epic campaign, plus new heroes, monsters, classes, and more! Set in a previously unexplored region of Terrinoth, Labyrinth of Ruin takes players on a riveting journey to the broken remains of a forgotten city. Throughout the many quests included in this expansion, heroes will enlist the aid of unique allies in their mission to stop the evil overlord.

Related links to "Descent 2nd Edition - Labyrinth of Ruin Expansion"
Product Information
Zu den Produkteigenschaften more
Close menu
Product information "Descent 2nd Edition - Labyrinth of Ruin Expansion"
Evaluations 0
Read, write and discuss reviews... more
Close menu
Customer evaluation for "Descent 2nd Edition - Labyrinth of Ruin Expansion"
Write an evaluation
Evaluations will be activated after verification.
Customers also viewed
Customers also viewed
Viewed
This website uses cookies, which are necessary for the technical operation of the website and are always set. Other cookies, which increase the usability of this website, serve for direct advertising or simplify interaction with other websites and social networks, will only be used with your consent.
Decline Accept all Configure