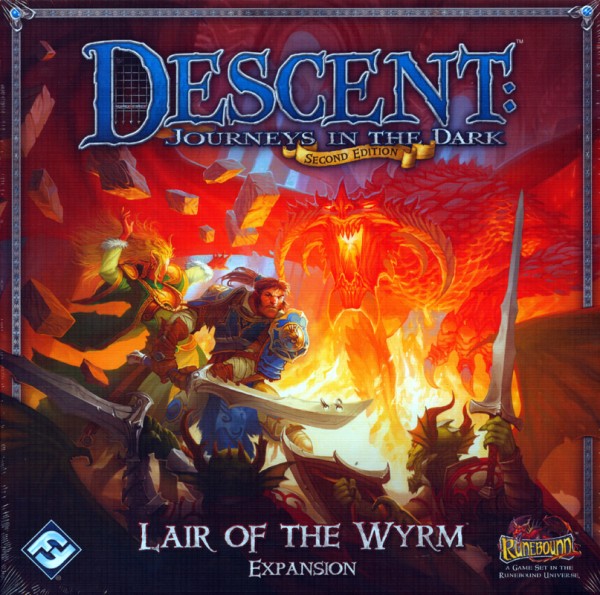 Bring even more adventure to your Descent: Journeys in the Dark Second Edition campaigns with Lair of the Wyrm, an expansion that introduces new heroes, classes, monsters, quests, and more! Heroes can now discover secret rooms and investigate suspicious rumors, while the Overlord equips himself with deadly never-before-seen tricks as he fields a powerful new lieutenant. Dark secrets await within Valyndra’s lair. Do you have the courage to face the dreaded Wyrm Queen?

Lair of the Wyrm includes:

This is just an Expansion! You need the core game Descent: Journeys in the Dark Second Edition to play with it.
Related links to "Descent 2nd - Lair of the Wyrm Expansion"
Product Information
Zu den Produkteigenschaften more
Close menu
Product information "Descent 2nd - Lair of the Wyrm Expansion"
Evaluations 0
Read, write and discuss reviews... more
Close menu
Customer evaluation for "Descent 2nd - Lair of the Wyrm Expansion"
Write an evaluation
Evaluations will be activated after verification.
Customers also viewed
Customers also viewed
Viewed
This website uses cookies, which are necessary for the technical operation of the website and are always set. Other cookies, which increase the usability of this website, serve for direct advertising or simplify interaction with other websites and social networks, will only be used with your consent.
Decline Accept all Configure