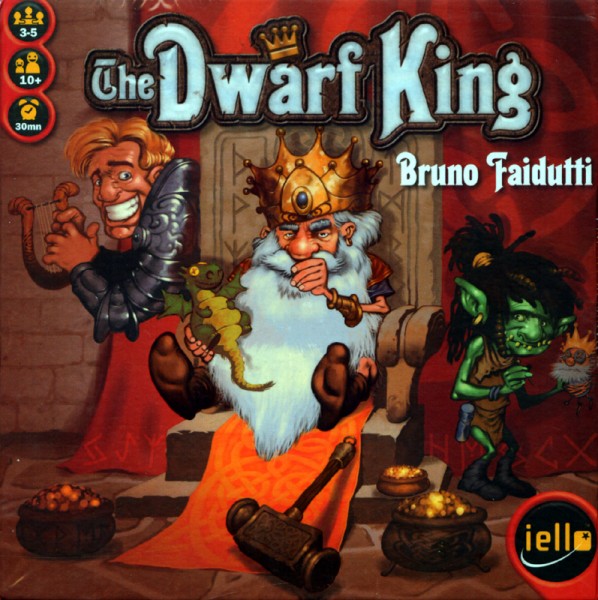 The game is played over seven rounds. At the start of a round, the dealer randomly draws one special card, reads it to all the players, shuffles it into the deck, then deals the deck out evenly to all players. (The dealer for the first round is the game's owner; for subsequent rounds, the dealer is the one who took the 5 of Dwarves in the previous round.) The player who receives the 5 of Knights draws a contract tile, reads it, then chooses one of the two scoring rules on it to apply for that round.

The player holding the 5 of Goblins leads on the first trick. Players must follow suit if possible, and the game inclues no trump. The highest card played of the suit led wins the trick and leads to the next trick. Once all cards have been played, players tally their points (possibly negative), remove the special card and contract tile from the game, then shuffle for the next round.

The player who scores the most points over seven rounds wins the game.

Related links to "The Dwarf King"
Product Information
Zu den Produkteigenschaften more
Close menu
Product information "The Dwarf King"
Evaluations 0
Read, write and discuss reviews... more
Close menu
Customer evaluation for "The Dwarf King"
Write an evaluation
Evaluations will be activated after verification.
Customers also viewed
Customers also viewed
Viewed
This website uses cookies, which are necessary for the technical operation of the website and are always set. Other cookies, which increase the usability of this website, serve for direct advertising or simplify interaction with other websites and social networks, will only be used with your consent.
Decline Accept all Configure