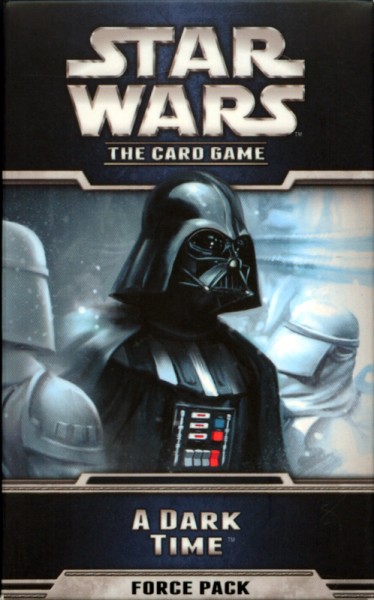 Description Product Information Evaluations 0
Description
It is a dark time for the Rebellion. Although the Death Star has been destroyed, Imperial... more
Close menu
Product information "Star Wars LCG: A Dark Time"

It is a dark time for the Rebellion. Although the Death Star has been destroyed, Imperial troops have driven the Rebel forces from their hidden base and pursued them across the galaxy.
–The Empire Strikes Back

The Battle of Hoth heats up in A Dark Time, the third Force Pack™ in The Hoth Cycle for Star Wars™: The Card Game! Rebel forces prepare for evacuation, and Imperial walkers advance and open heavy fire. A Dark Time adds more objectives with the Hoth trait even as light and dark side forces prepare to clash for control of the desolate ice planet. New characters, fighters, and locations populate the battlefield and encourage strategies built around assaulting damaged objectives and winning the Force struggle.

A Dark Time draws inspiration from the early scenes of The Empire Strikes Back while relating the ongoing tale of the light side's desperate stand on Hoth, but its cards also do more. They simultaneously expand the game's exploration of Hoth and of the Star Wars universe beyond the characters, vehicles, and events captured in the classic films.

This is not a stand-alone deck. A Star Wars™: The Card Game Core Set is required to play

Related links to "Star Wars LCG: A Dark Time"
Product Information
Zu den Produkteigenschaften more
Close menu
Product information "Star Wars LCG: A Dark Time"
Evaluations 0
Read, write and discuss reviews... more
Close menu
Customer evaluation for "Star Wars LCG: A Dark Time"
Write an evaluation
Evaluations will be activated after verification.
Customers also viewed
Customers also viewed
Viewed
This website uses cookies, which are necessary for the technical operation of the website and are always set. Other cookies, which increase the usability of this website, serve for direct advertising or simplify interaction with other websites and social networks, will only be used with your consent.
Decline Accept all Configure