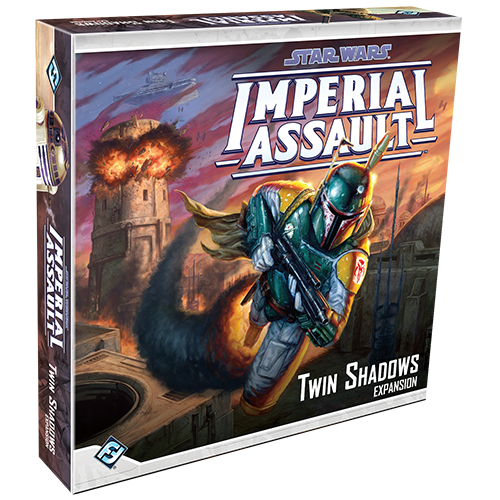 The Galactic Civil War touches every planet eventually, even those on the galaxy’s Outer Rim. Now, the war has come to the desert planet of Tatooine. Long dominated by the galaxy’s Scum and Villainy, a growing Imperial presence on Tatooine has prompted the Rebellion to send Han Solo with R2-D2 and C-3PO to investigate. But communications with Han Solo have been cut off, and your elite team of Rebel operatives is dispatched to uncover the truth.

Twin Shadows is a new expansion for Imperial Assault, offering plenty of new content for both the campaign and skirmish games. Danger lurks around every corner in this expansion: Twin Shadows boasts six new missions that can be played as side missions for a larger campaign. These missions can also be strung together as a fully formed mini-campaign chronicling your efforts to rescue Han Solo and survive the danger that waits on Tatooine. In addition, this expansion offers two new skirmish missions, offering new opportunities for you to battle a friend in thrilling tactical battles.