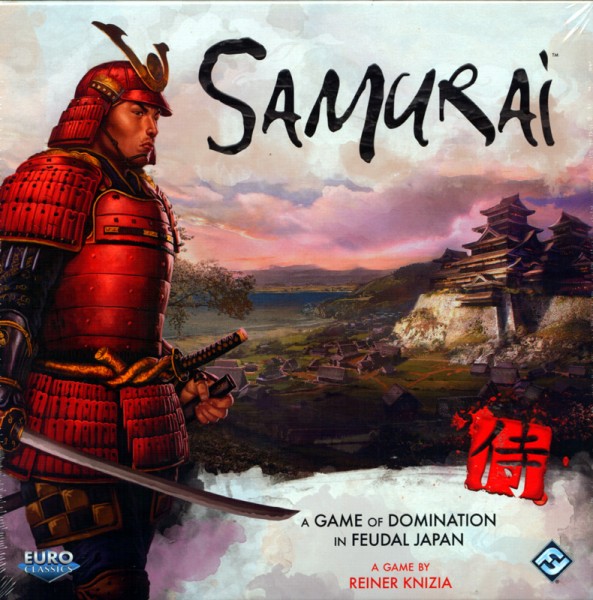 Description Product Information Evaluations 0
Description
The year is 1336. Japan’s emperor has lost all authority and is little more than a figurehead.... more
Close menu
Product information "Samurai Board Game"

The year is 1336. Japan’s emperor has lost all authority and is little more than a figurehead. Across the country, powerful lords called daimyo have risen up and begun to claim dominion over the land and its resources. But all true paths to power depend upon the service of the elite, noble warriors known as samurai.

Fantasy Flight Games is proud to announce the return of Samurai, a beloved tile-placement game by Reiner Knizia set amid the turbulent times of feudal Japan!
The Euro Classics Line

In Samurai, two to four players assume the roles of ambitious daimyo competing for control of Japan. To rise above your rivals and influence the nation's cities and villages to your cause, you must prove you can lead their people. Through the strategic placement of tiles, you can establish your sway over lesser lords, the production of rice, and the region's religious leaders. Sometimes, though, even these won't be enough to establish your dominance, and to cement your claim, you must send in your samurai.

This edition of Samurai maintains the game’s original mechanics while updating it with beautifully sculpted game pieces, new leader tokens to aid in scoring, and all-new art and graphic design that draw upon traditional Japanese styles.
Related links to "Samurai Board Game"
Product Information
Zu den Produkteigenschaften more
Close menu
Product information "Samurai Board Game"
Evaluations 0
Read, write and discuss reviews... more
Close menu
Customer evaluation for "Samurai Board Game"
Write an evaluation
Evaluations will be activated after verification.
Customers also viewed
Customers also viewed
Viewed
This website uses cookies, which are necessary for the technical operation of the website and are always set. Other cookies, which increase the usability of this website, serve for direct advertising or simplify interaction with other websites and social networks, will only be used with your consent.
Decline Accept all Configure