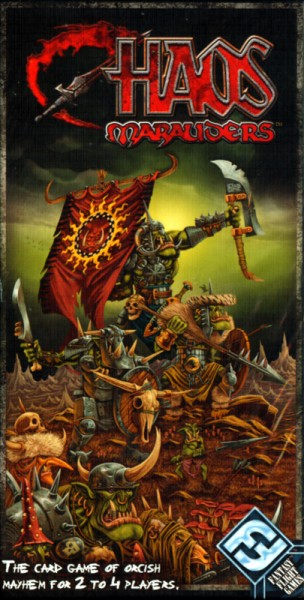 This product is currently not available.
Please inform me as soon as the product is available again.
€26.95 *

A vast Chaos army is marching north, when suddenly the sprawling mass of bored and surly Orcs grinds to a halt because of yet another petty feud.  In Chaos Marauders, each player takes control of one of the Orc clans involved, ready to show all the other mangy little creeps who’s boss of dis ‘ere scabby battle mob.

You’ll stop at nothing to win. No amount of trickery will be low enough, no amount of thugish brutality too vile. Who knows, you may even get the mysterious Chaos Marauders on your side. Only one tribe can come out on top – will it be yours?

to lay waste to rival mobs! These grunts are boorish, disorganized, and just plain stupid... but they’re the only tribe you’ve got. So grab the whip and get ‘em into shape.

Related links to "Chaos Marauders"
Product Information
Zu den Produkteigenschaften more
Close menu
Product information "Chaos Marauders"
Evaluations 0
Read, write and discuss reviews... more
Close menu
Customer evaluation for "Chaos Marauders"
Write an evaluation
Evaluations will be activated after verification.
Customers also viewed
Customers also viewed
Viewed
This website uses cookies, which are necessary for the technical operation of the website and are always set. Other cookies, which increase the usability of this website, serve for direct advertising or simplify interaction with other websites and social networks, will only be used with your consent.
Decline Accept all Configure