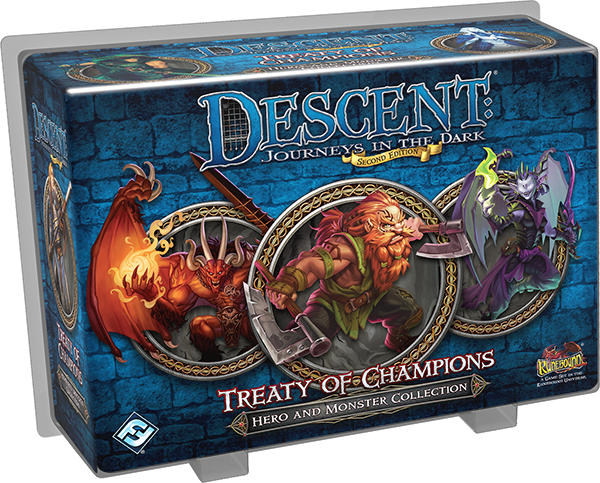 Years ago, a band of legendary champions united to bind a terrible demon and keep it from ravaging the realm of Terrinoth. These champions have recently disappeared into the haunted lands of the south, however, and the magical bonds that imprison the demon are fading. If you would protect Terrinoth from danger, you must gather a band of champions to equal those who came before and face dangers that none have yet encountered.

Treaty of Champions contains fourteen sculpted plastic figures to enhance your Descent campaigns. Although the majority of these figures were introduced in the first edition of Descent, this Hero and Monster Collection also features the crow hags: a completely new monster group! Alongside the crow hags, the overlord player gains access to skeleton archers and demon lords, while the heroes can muster four unique heroes – Jonas the Kind, Grey Ker, Krutzbeck, and Zyla. In addition, you’ll find two brand-new quests in this expansion that challenge you to stop an ancient demon from rising again.

Related links to "Descent 2nd Edition - Treaty of Champions"
Product Information
Zu den Produkteigenschaften more
Close menu
Product information "Descent 2nd Edition - Treaty of Champions"
Evaluations 0
Read, write and discuss reviews... more
Close menu
Customer evaluation for "Descent 2nd Edition - Treaty of Champions"
Write an evaluation
Evaluations will be activated after verification.
Customers also viewed
Customers also viewed
Viewed
This website uses cookies, which are necessary for the technical operation of the website and are always set. Other cookies, which increase the usability of this website, serve for direct advertising or simplify interaction with other websites and social networks, will only be used with your consent.
Decline Accept all Configure