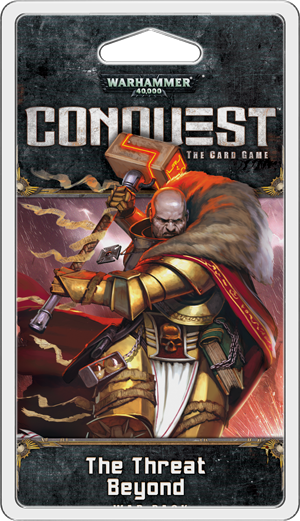 Description Product Information Evaluations 0
Description
“My purpose is to destroy the daemonic, and if I must rise to command an entire sector to do... more
Close menu
Product information "Conquest LCG: The Threat"

“My purpose is to destroy the daemonic, and if I must rise to command an entire sector to do so, then so be it.” –Torquemada Coteaz

It is your duty to safeguard the Imperium and vanquish corruption, and to accomplish this, you must bring the Traxis sector under the Emperor’s protection. The Threat Beyond War Pack is the fifth War Pack in the Warlord cycle for Warhammer 40,000: Conquest, and it calls you to fulfill this noble goal with a new Inquisitor warlord for the Astra Militarum.

This War Pack also continues the major themes of the Warlord cycle, introducing new warlords and new ways to take advantage of their prowess.

Sixty new cards, including one warlord, his eight-card signature squad, and three copies each of seventeen distinct cards bolster your forces in this expansion. You must vanquish all enemies of the Emperor in the Traxis sector, but in this war you will face Ork warbands, fearsome Noise Marines, and the might of the Eldar Wraithknights. Choose your faction and battle for the fate of the Traxis sector!

Related links to "Conquest LCG: The Threat"
Product Information
Zu den Produkteigenschaften more
Close menu
Product information "Conquest LCG: The Threat"
Evaluations 0
Read, write and discuss reviews... more
Close menu
Customer evaluation for "Conquest LCG: The Threat"
Write an evaluation
Evaluations will be activated after verification.
Customers also viewed
Customers also viewed
Viewed
This website uses cookies, which are necessary for the technical operation of the website and are always set. Other cookies, which increase the usability of this website, serve for direct advertising or simplify interaction with other websites and social networks, will only be used with your consent.
Decline Accept all Configure