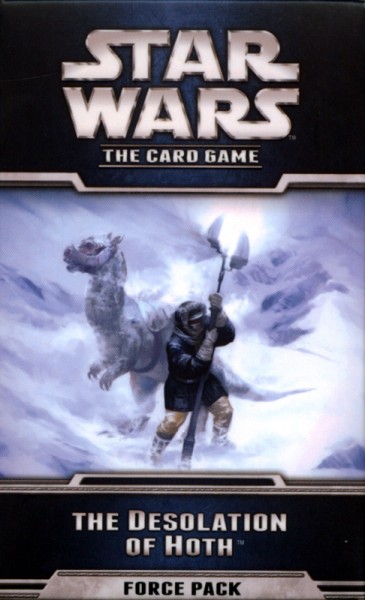 Beschreibung Produkteigenschaften Bewertungen 0
Beschreibung
"Echo Base…I've got something! Not much, but it could be a life form." –Zev Senesca,... mehr
Menü schließen
Produktinformationen "Star Wars LCG: The Desolation of Hoth"

"Echo Base…I've got something! Not much, but it could be a life form."
–Zev Senesca, Star Wars: The Empire Strikes Back

The battle for Hoth begins! The first Force Pack for Star Wars™: The Card Game is inspired by the early scenes from The Empire Strikes Back. The Desolation of Hoth brings you iconic new creatures, droids, snowspeeders, and characters like Wedge Antilles and Darth Vader. As Rebel forces and their allies establish their defenses, and the Empire scours the galaxy for signs of their hidden base, the frozen wastelands of Hoth set the stage for the game’s future battles.