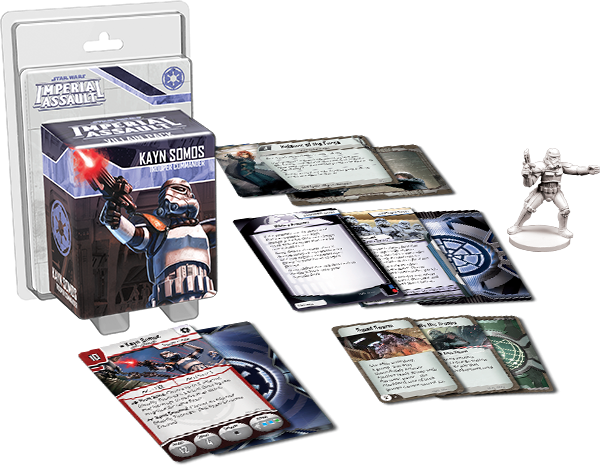 Legions of Stormtroopers are the fist of the Galactic Empire, smashing down on dissension and rebellion wherever they appear. These troopers are highly trained warriors, and a cunning leader only makes them more dangerous. In this figure pack, you gain access to Kayn Somos, a trooper commander renowned for his ruthless tactics.

Kayn Somos is a dangerous combatant in his own right, but he truly shines in his ability to command other Troopers in battle. He can focus his comrades, grant them more attacks, or harness a Command card like Rank and File to boost the movement of his Troopers. No matter where he goes on the battlefield, Kayn Somos is an inspiring presence, bringing increased firepower and keen battlefield tactics to the Empire’s troops. This Villain Pack also includes the Stormtrooper Support agenda set. With this set, you can challenge the Rebels to attack a Stormtrooper training facility and you can draw upon your endless reinforcements to overwhelm the heroes and extinguish the flame of Rebellion.

You’ll also find two new missions for the Imperial Assault skirmish game. You can lead Kayn Somos and his endless squads of Troopers into the Tython Meditation Fields or any other skirmish map, sweeping all opponents before the might of the Empire. Whatever your battlefield, Kayn Somos’s sound tactics and commanding presence help to tip the odds in the favor of the Galactic Empire.