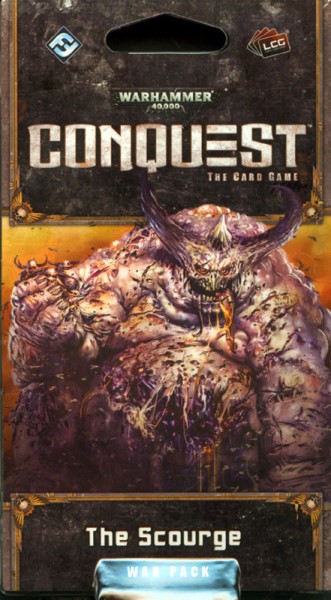 Spread your corruption throughout the Traxis sector in The Scourge, the second War Pack in the Warlord cycle for Warhammer 40,000: Conquest! The Scourge introduces a new warlord and a diseased style of play for Chaos with Ku’gath Plaguefather, a Daemon of Nurgle. In addition to Ku’gath and his Nurglings, you’ll find cards for each faction within this expansion, ranging from Space Wolves for the Space Marines, to Attack Squigs for the Orks, to powerful new battle tactics for the Tau.

This War Pack contains sixty cards, including one warlord with its signature squad and three copies each of seventeen unique cards, giving you a full play set of every unit, support, event, and attachment. Whether you torture your opponent with the Dark Eldar or strike from an Inquisitorial Fortress with the Astra Militarum, you’ll find the cards you need in The Scourge.

Contains cards 23-44 of the Warlord cycle.