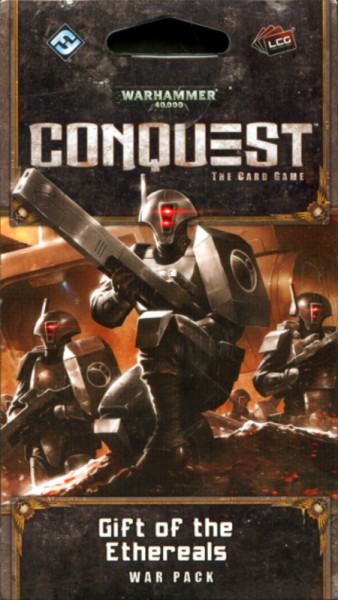 Beschreibung Produkteigenschaften Bewertungen 0
Beschreibung
“I have taken great pains not to laugh at the actions of aliens, nor to weep at them or to... mehr
Menü schließen
Produktinformationen "Conquest LCG: Gift of the Etherals"

“I have taken great pains not to laugh at the actions of aliens, nor to weep at them or to hate them, but to understand them.”
–Aun’shi, Tau Ethereal

Fight for the cause of the greater good with Gift of the Ethereals, the third War Pack in the Warlord cycle for Warhammer 40,000: Conquest! This War Pack introduces a new warlord for the Tau empire, allowing your Ethereals to lead your other Tau onwards to glorious victory. Alongside these Tau leaders, you'll find White Scars for the Space Marines, powerful wargear for the Astra Militarum, and new servitors of Nurgle for the hordes of Chaos.

This War Pack contains sixty cards, including one warlord with its signature squad and three copies each of seventeen unique cards, giving you a full play set of every unit, support, event, and attachment. Whether you lead a Waaagh! with the Orks, hire Dark Eldar mercenaries, or harness the power of Eldar psykers, you'll find plenty of cards for every faction in Gift of the Ethereals.

Contains cards 45-66 of the Warlord cycle.