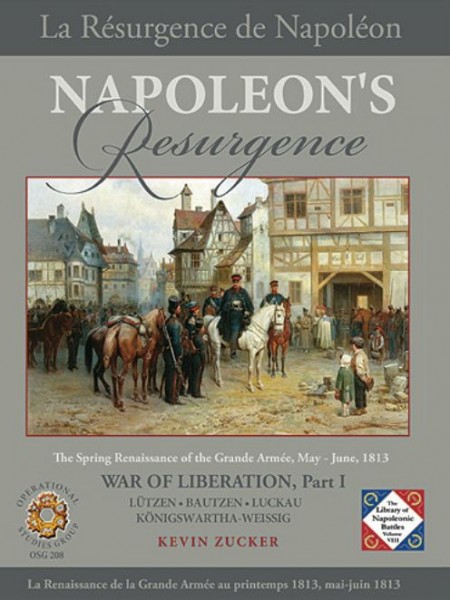 War of Liberation I
Spring 1813 Renaissance of the Grande Armée

Napoleon advanced into Saxony with a fresh army of 130,000 men, conscripted and trained from scratch in just four months. The green cannon fodder lost 25,000 of their number at the Battle of Lützen on May 2nd, and 15,000 more fell out along the march from weakness, malnutrition, and disease. With additional reinforcements the army surged again to 160,000, intercepting the Coalition armies at Bautzen. French youth left on the Saxon field 12,000 men, and even more march attrition. The Russians and Prussians were losing just as many, and had not as many to lose. But Napoleon's mere 6,500 cavalry were wholly inadequate to impel his pursuits with the needed punch to damage the enemy. In hopes of building up his strength in cavalry and the other arms, Napoleon accepted a six-week truce. Late Summer negotiations, when they finally came, were not seriously engaged.

Related links to "Napoleon&#39;s Resurgence"
Evaluations 0
Read, write and discuss reviews... more
Close menu
Customer evaluation for "Napoleon&#39;s Resurgence"
Write an evaluation
Evaluations will be activated after verification.
Customers also viewed
Customers also viewed
Viewed
This website uses cookies, which are necessary for the technical operation of the website and are always set. Other cookies, which increase the usability of this website, serve for direct advertising or simplify interaction with other websites and social networks, will only be used with your consent.
Decline Accept all Configure