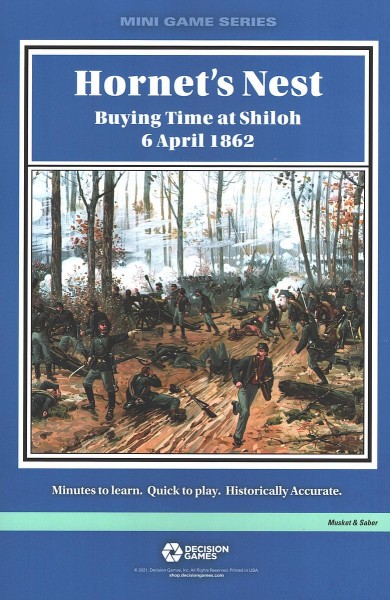 At dawn, the Confederates attacked Ulysses S. Grant’s Union army camp at Pittsburgh Landing, Tennessee, near Shiloh Church. The inexperienced first line dissolved under the impact. The remnants, with reinforcements, took station covering the roads to the landing. The position became a magnet for both sides and was dubbed the “Hornet’s Nest” due to the volume of bullets. The Union line cracked after a bloody struggle, but too late for the Confederate’s purposes. A quicker Union collapse might have resulted in the capture of Grant’s entire army.

Hornet’s Nest uses the Musket & Saber QuickPlay system to portray battle in the American Civil War. Combat is based on unit quality over quantity, and rewards use of historical tactics. Infantry—tough and resilient—bears the brunt of battle. Artillery can smash attacks or open holes in enemy lines, but is vulnerable and brittle. All units are susceptible to rout when weakened, so reserves are a must. Leaders enhance unit capabilities. Special rules cover the rallying of Union remnants and the formation of a massive Confederate artillery battery.

Winning depends on careful deployment, balancing maneuver and attacks, and judicious use of leaders.

Across Suez - The Battle of the Chinese Farm, 1973