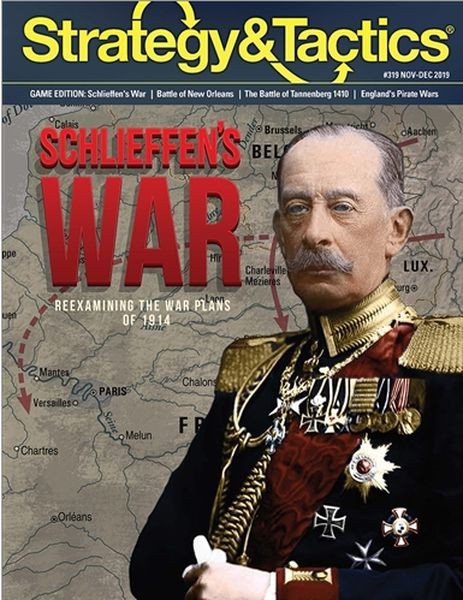 Schlieffen's War - Reexamining the War Plans of 1914: The opening of the Great War on the Western Front has been presented as a clash between the German and French pre-war plans. Both have been the subject of revisionist thinking, forcing a reappraisal of the driving force of the critical first six weeks of the war.

Schlieffen’s War is a strategic-level two-player wargame of low-intermediate complexity that covers the first six weeks of fighting on World War I’s western front in 1914. The game’s sub-systems are crafted to present a supreme-commander’s-eye-view of the war: it is therefore almost fully strategic in its perspective, with only the most pastel of operational undertones added to enhance historical tone and texture. Each hex on the map represents 16 miles (26 km). Each full turn of play represents four days of real time. Units of maneuver are corps with army HQ also being represented. Static fortresses also play an important role in play. One player commands the German forces. The other player commands the Entente forces (Belgian, British, and French) which are allied with each other, in opposition to the Germans.