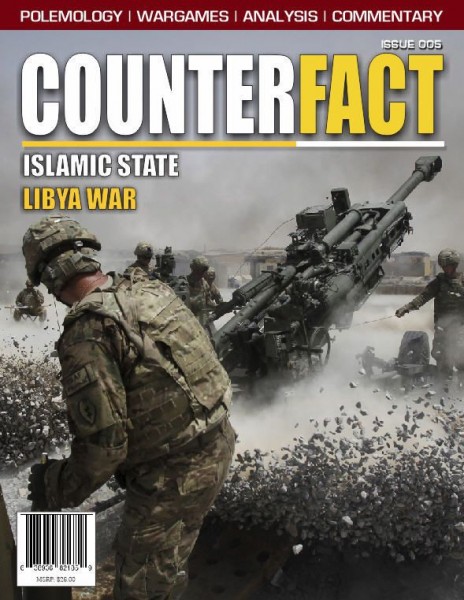 Beschreibung Bewertungen 0
Beschreibung
From the Publisher: The game in that issue is a purpose-designed solitaire effort by Javier... mehr
Menü schließen
Produktinformationen "Counter Fact Magazine - Issue #5"

The game in that issue is a purpose-designed solitaire effort by Javier Romero titled "ISIS Libya." The player commands a near-future international US/EU/NATO coalition intending to overthrow the nascent Islamic state in North Africa.

The Game:
Islamic State: Libya War (ISLW) is set in a near future scenario, late in this decade, where the Libyan and Tunisian states have collapsed into civil war, pitting Radical Islamists versus Nationalist forces, with most radical Islamists pledging loyalty to the Islamic State (IS) after the arrival of well-trained, elite IS cadres from Iraq and Syria. These IS forces defeated the Tripoli-based Muslim brotherhood forces and the Tobruk-based Nationalist government.

Now having control of most of Libya and Tunis, the new rogue state launched terror attacks against touristic resorts in Southern Greece, Italy and Spain. This, coupled with the arrival of huge masses of migrants fleeing from the war, threatened with destabilizing the southern shores of the European Union, which were already suffering the effects of a systemic, decade-long economic crisis. The IS got hold of oil and gas producing areas in Libya, thus financing their activities in Iraq and Syria, the Sahel, Sub Saharan Africa and elsewhere, with the aim of expanding militarily towards Sudan, Algeria, Chad and Mali. In a desperate attempt to stabilize the North African region, a coalition formed by the EU, the US, Egypt and the surviving anti-Islamist forces in Tunis and Libya launch a stabilization campaign spearheaded by elite special operation forces.

Libya War explores the first few weeks of that hypothetical pacification campaign scenario. The Western countries (US, NATO) and their Arab Allies (Tunisians and Libyan nationalists) are controlled by the player. The Islamic State (“IS” from now on) is controlled by the system.