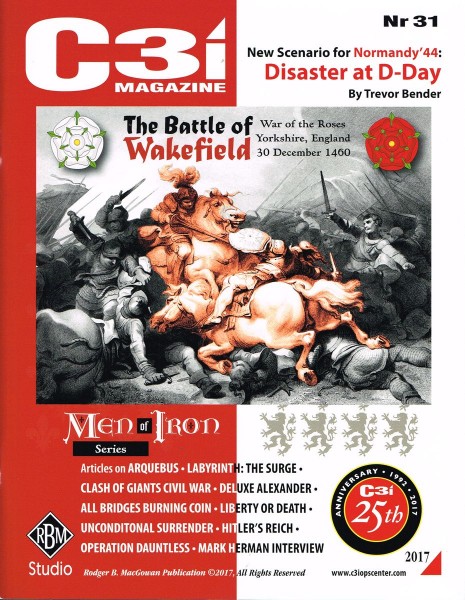 Beschreibung Videobeiträge Bewertungen 0
Beschreibung
From the Publisher: The Magazine:   A short description of what each article... mehr
Menü schließen
Produktinformationen "C3i: #31"

A short description of what each article in this issue covers

• RBM’s C3i Magazine: Editor-in-Chief Rodger B. MacGowan takes a brief look back at the road C3i Magazine has traveled over 25 years.

• Disaster at D-Day—New Scenario for Normandy’44 by Trevor Bender: A counterfactual scenario for the game Normandy ’44; this article details the specifics of the scenario, the literary and historical background and reasoning behind the changes, as well as an addendum article on counterfactual history as a subtopic of speculative history.

• The Battle of Wakefield, 1460 – Historical Background by Ralph Shelton: Who was the Duke of York? Why did he rebel against the Lancastrian King? What path led him to Wakefield? Read about the battle that set England against itself for more than 30 years with the War of the Roses.

• Weaponry in Arquebus – Men of Iron by Richard H. Berg: Get into the nuts and crossbow bolts of how each unit type used in the game Arquebus (part of the Men of Iron series) operated in Italian history, and their relative strengths and weaknesses.

• Overview & Tactical Tips for Clash of Giants Civil War by Steve Carey: Take a look at some of the subtle nuances inherent in the elegantly designed Clash of Giants: Civil War.

• Clio’s Corner #8 by Mark Herman: In Pericles, which simulates the Peloponnesian Wars, the winner of the game is the player who can cooperate with his opposition faction in order to win the war as a team, while defeating them politically. Discover how Alexander Hamilton’s musings in the Federalist Papers helped designer Mark Herman mold this game system into being.

• C3i Interview – Mark Herman by Sam Sheikh: Mark Herman reflects on his game design career, from his early days at SPI to today and beyond.

• All Bridges Burning, Finland 1917-18 – COIN Series Preview by VPJ Arponen: Here is an exclusive preview of one of the new entries into the COIN series. Follow the designer as he walks through how his design examines the question of what a country can become after a brutal and divisive civil war.

• Operation Daunting? Battle Report by Mark Kaczmarek: Put off by long rulebooks? Don’t worry, Mark Kaczmarek has you covered—jump into the Battles for Fontenay and Rauray in France, June 1944, and play a few rounds of Operation Dauntless with him to see how you like it.

• Liberty or Death – The History Behind the Counters by Trevor Bender: The key figures of the Revolutionary War are lauded and praised, but what about the secondary and tertiary players? Read about how they impacted the American Insurrection.

• Alexander Battle Module: Battle of Corupedium, 281 BC by Daniel A. Fournie: In the previous issue, the first battle of the Diadochi (Successors to Alexander the Great), Hellespont, was presented. Now we take a look at the last battle fought by the original successors—Lysimachus versus Seleucus at the Battle of Corupedium, 281 BC. Read about the history, then play the module included in Nr 31’s free inserts!

• Designing Hitler’s Reich by Mark G. McLaughlin, Fred Schachter & Vez Arponen: “…There was no simple, quick to set up game of WWII that we could complete in an evening. Being a game designer, I took his cranky rant for a challenge and within two weeks had come up with the first rough draft of what would become a new strategic game for the WWII European Theater: Hitler’s Reich.”

• Unconditional Surrender – Policy Markers Track by Salvatore Vasta: Designed to assist gamers playing the Three-Faction Europe Scenarios of Unconditional Surrender. This is a two player game covering the World War II military campaigns fought in southern Russia during 1942-1943. One side controls the Axis forces, while the other side controls the forces of the Soviet Union.

• COIN Player Aid – How to Play 4-Faction COIN System by Brian Train: Turn any COIN game that requires 4 players into a 2-player affair using half a page of rules! An extremely valuable set of rules to have.

• History of Wargame Graphic Design Poster – by David Dockter and Rodger B. MacGowan

It was at Wakefield that Richard, Duke of York, met his doom. Richard was head of the Yorkist faction, and had begun the rebellion against King Henry VI that is now known as the War of the Roses. It isn’t clear why he rode our that day against an army with numerical superiority, but the end result was calamity for the Yorkist contingent. About half the army perished, including Richard and the Earl of Salisbury (father of Warwick the kingmaker). Can you break the Lancastrian army before its reinforcements arrive or will you share Richard’s fate?

Bring Your Own: Dice

The Batman Who Laughs Rising

Time of Crisis - Age of Iron and Rust Expansion

Time of Crisis - The Roman Empire in Turmoil,...