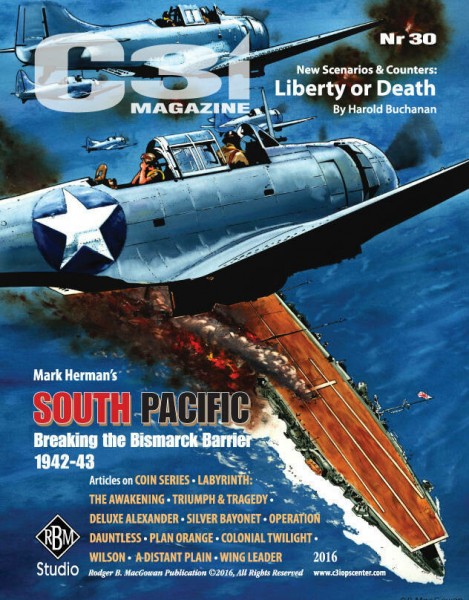 The Game:
South Pacific (SPac) is an Empire of the Sun (EotS) C3i Scenario Variant that uses the full scope of its parent design. While South Pacific is a complete stand alone game, all of the tactics that work in EotS work in SPac. What is unique about SPac is the smaller map region (see C3i 30 back cover image) focuses and significantly simplifies the strategic options available to the two sides.

Each side has a 24 card deck that are like the EotS cards except they have been renumbered. The counter mix is also identical, except we have aligned the set up and reinforcement markings to the four-turn scenario. In designing this new C3i Scenario Variant, I wanted to put you in the shoes of MacArthur and Ghormley/Halsey prosecuting the US counterattack, while still being impacted by interservice rivalry, China, and competition for resources in Europe. All of the relevant tracks have been redesigned by Mark Simonitch to fit on the tailored C3i Mapsheet surface that shines a spotlight on the turning point in the Pacific War.

Since this is a subset of the broader war each player is playing with a four rather than a seven card hand, and you will never reshuffle the deck allowing for high replayability. The practical result of this smaller hand of cards is South Pacific typically clocks in at less than two hours, so easily a one-session game.

If you learn to how to play South Pacific you will also know how to play its parent game Empire of the Sun.

The Magazine:
A short description of what each article in this issue covers

RBM’s Fire & Movement Magazine – 40th Anniversary by Rodger B. MacGowan: Editor-in-Chief RBM has compiled a group of retrospectives done by various luminaries of the wargame hobby about Fire & Movement

Propaganda Round: COIN Series Variety – Familiar Not Samey by Volko Ruhnke: Volko examines a key issue regarding the series he founded, that of variety. It explores how the COIN Series has sought to thread the needle of ascending variety through a stable core that is modified by diversity in settings and designers. Familiar, Not Samey.

Liberty or Death: The American Insurrection Strategy Guide by Harold Buchanan: “This article is intended to share my thought process when I play and how I view the set of strategic alternatives. My personal view is that the game supports a wide variety of strategies and an agile player will adjust in response to the actions of others at the table.”

Triumph & Tragedy – Five New Scenarios – The War Years by Tim Taylor: Although Triumph & Tragedy is not really an historical simulation, it’s still interesting to examine the possibilities of World War II through its “lens” — one snapshot at a time. Each scenario depicts the beginning of a year of the war; forces are arrayed approximately as in history, within the game’s parameters of course. These C3i scenarios provide a springboard for players to explore the many “what ifs?” of World War II.

Clio’s Corner #7: There is no substitute for victory...or is there? by Mark Herman: Nowadays, a lot of gamers hew to Douglas MacArthur’s thinking that “there is no substitute for victory,” and many buying decisions are based on the collective sense that a game should be balanced and true to history. Mark Herman discusses how he incorporates balance into historical designs as well as the trials of balancing a solitaire system within the same design.

Silver Bayonet – C3i Battle Report by Mitchell Land, John Leggat & Allen Martin: To celebrate the 25th anniversary of Silver Bayonet, Mitchell, John and Allen got together to chronicle a playthrough of the game that launched GMT Games (simulating the struggle for survival of Hal Moore’s 1/7th Cavalry Troopers in Vietnam, 1965).

Colonial Twilight at U.S. Army War College by Lieutenant Colonel Joseph Chretien: Including a sidebar by game designer Brian Train, LTC Joseph Chretien documents Brian’s unique facilitation of an event at the USAWC, where attendants viewed the film Battle of Algiers, followed by playthroughs of Colonial Twilight which covers the same struggle between French COIN forces and Algerian insurgents.

A Distant Plain: Non-Player Variant Insert Card – by V.P.J. Arponen: A ‘Bots variant for A Distant Plain (about the modern day Insurgency in Afghanistan), this variant preserves the familiar format of non-player priorities in action selection, and as a novelty it encourages the player to play as any four of the Factions. The revised non-player rules are also here on the C3i Ops Center.

C3i Player – Gamer Profile of Film Director & Game Player Lance Nielsen by Sam Sheikh: Lance Nielsen has been a gamer since the 1980s. Inspired by the stories and history he has played, his new movie, Pegasus Bridge, chronicles the 7th Para and Ox and Bucks units’ efforts to take and hold the bridge during Operation Market Garden. He also tells us about how he got his start in gaming and why he thinks it is so important to him.

C3i Player – Profile of SPI Game Designer Lenny Glynn by Sam Sheikh: Renowned game designer Lenny Glynn reflects on his days at SPI, and the surprising road he took to get to today through Time Magazine, the Oval Office, Victory Games, and is now making a Go version of the Pacific Theatre during WW2.

South Pacific, C3i Game in Nr30 – Strategy Notes by Mark Herman: “South Pacific (SPac) is an Empire of the Sun (EotS) C3i Scenario Variant that uses the full scope of its parent design. While South Pacific is a complete stand alone game all of the tactics that work in EotS work in SPac. What is unique about SPac is the smaller map region (sub-set of EotS map) focuses and significantly simplifies the strategic options available to the two sides. I should mention, if you learn how to play SPac you have also learned how to play EotS.”

Plan Orange, C3i Game in Nr29 – Strategy Guide by Mark Kaczmarek: Mark Kaczmarek boils down some of the tips he provides to new players for this fascinating “What If?” game (included in C3i Issue Nr 29) simulating a conflict between the United States and Japan in the early to mid-1930s instead of 1941.

• Alexander Set-Up Card – Battle of Hellespont, 321 BC – by Daniel A. Fournie