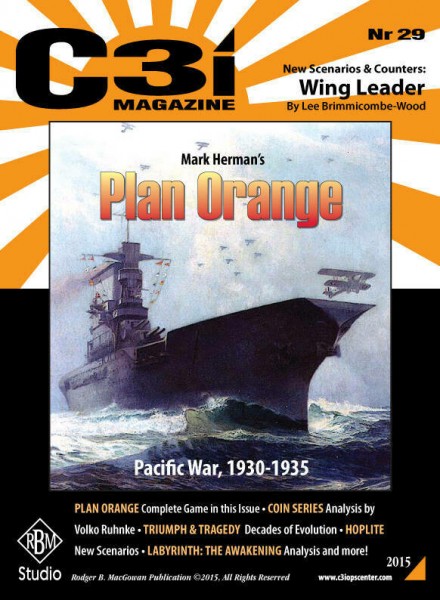 “Plan Orange: Pacific War 1930-1935 is a game focused on a hypothetical earlier start to what became the Pacific War during World War II. One player takes the side of the Japanese and the other the United States.

If you play a game of Plan Orange you will also find yourself fully qualified to play Empire of the Sun (GMT Games) as the game systems are identical with most of the differences around the political conditions that prevailed in World War II. Even if you never play Empire of the Sun we hope you enjoy this walk down an alternate path not taken with Plan Orange.” -Mark Herman, Designer

A short description of what each article in this issue covers

Waterloo Bicentenary, 1815-2015 by Dana Lombardy: Dana Lombardy is a proud backer of the Waterloo 1815 Project, helping to support the non-profit NHS and draw more awareness to the impact Wellington’s “near-run thing” had on history.

COIN Series Complexity—Bigger is Not Always Better by Volko Ruhnke: “Later volumes [of a series] are likely to meet an audience already and increasingly familiar with the core system. The designer may rely…upon that system familiarity and so expand further and further the mechanics in the pursuit of simulation and innovation. This is a mistake that I have sought to avoid in the COIN Series. This article examines how.”

Empire of the Sun—The reason I game is because… by Lucas Brooks: A man and his board game, what could be more romantic?

C3i Interview—Game Designer Brian Train by Sam Sheikh: The designer of A Distant Plain sits down with C3i’s Sam Sheikh to discuss how to make a small fortune from a large one, why Brian’s game design is so irregular from others, and how he got his start in the business.

The Travellers of Catalan by Jason Matthews: The globetrotter and co-designer of Twilight Struggle, Jason Matthews, went to Spain at the invitation of a stranger. Try to keep up as he plows through a swath of exciting and exotic games that say a lot about the design talents of Hispania.

C3i Player—Gamer Profile of Gian Carlo Ceccoli by Sam Sheikh: Meet Gian Carlo Ceccoli, one of the board game regulars at the local board game meetup in San Marino. Oh yeah, he also hosts the San Marino Game Convention, where wargames and others like Warhammer and Magic make their mark. Visit his website at www.asgs.com

Clio’s Corner #6 Multiplayer Design in Churchill by Mark Herman: “I am writing this piece one month after Churchill: Big Three Struggle for Peace has hit gaming tables around the world. I want to use this installment of my column to discuss multiplayer design theory as experienced by me with Churchill. I hope to tell this story through the eyes of one of history’s most infamous dictators, Joseph Stalin, and how it feels to play in a three-player game against two artificial intelligence ‘Bots named Churchill and Roosevelt.”

Triumph & Tragedy: Two Decades of Evolution by Tim Taylor & Craig Besinque: “I couldn’t help bit smile when I cracked open Triumph & Tragedy (GMT Games), the new game of great power conflict in the 1930s and 40s. So many memories from the last 20 years came flooding back in an instant. And like Michael Proust, I have chosen to write about how inanimate objects can transport us through the decades in the blink of an eye. But I’ll be somewhat more succinct.”

Tom Shaw: Confessions of an 84 year old Teenage—Book Review by Sam Sheik: “The name Avalon Hill (AH) still carries strong feelings of affection and nostalgia…Tom was the Vice President of AH during its most innovative and productive years. His self-published memoir is a treasure trove of snippets about his life, of which Avalon Hill played a significant, though not all-consuming part. Let me explain.”

Labyrinth: The Awakening—From Game Player to Game Designer by Trevor Bender: “There is a story here, and it needs to be told on the Labyrinth map,’ I said. Volko Ruhnke listened to my ideas, suggested a new rule, and gave his permission for me to run with the concept. What follows is a chronological representation of the nine month process to take Labyrinth: The Awakening from early concept, through playtesting, and ultimately to final design layout, with commentary that might benefit future would be game designers.”

Second Hajj—Labyrinth: The Awakening 2010-? By Volko Ruhnke: Volko writes about why Trevor Bender’s work on Awakening was so successful, and how he used it as an opportunity to improve his own system from the original.

Madison’s War—The Game as History by Gilbert Collins: Designer Gilbert Collins discusses his design philosophy behind making Mr. Madison’s War capable of reproducing, but not binding a player, to the real historical outcome via the game’s event cards.

Jours de Gloire Series & Bicentenary Tour of Waterloo 2015 by Frederic Bey: Take a walk through the battlefield at Waterloo as Frederic Bey, designer of the Jours de Gloire series, recalls the series’ origins, evolutions, and historical elements taken into account.

Los Angeles Game Box Production—No Retreat: Italian Front by Jeff Kaye: From press sheet to packed for shipping, watch as a board game box comes into the world!

Hoplite Battle Module—Sparta’s Persian Expedition by Daniel A. Fournie: Accompanying Issue Nr 29’s inserts, The Battles of Meander, 397 BC and Sardis, 395 BC, Daniel Fournie breaks down the historical background of these two critical battles along Sparta’s march through Persian Anatolia during the time of Cyrus and Xenophon.

C3i Player—Gamer Profile of Hans Korting by Steven D. MacGowan: Hans gives us a tour of what it’s like to be a gamer in The Netherlands, describing why he is drawn to air warfare, and chronicling his experiences working with some of the greats within the wargaming industry.

Empire of the Sun (3rd Printing)