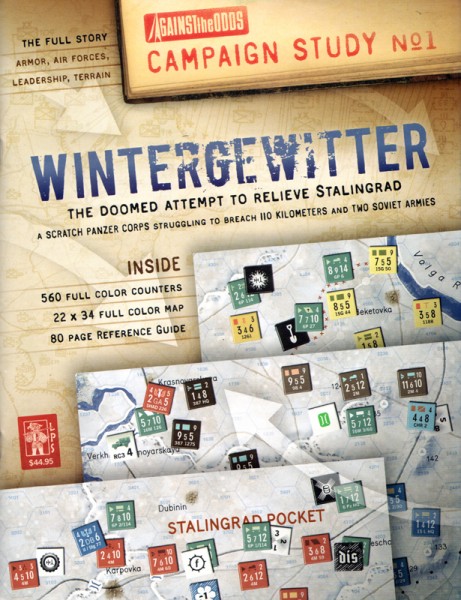 Beschreibung Bewertungen 0
Beschreibung
But if the whimper can be debated, the final "bang" is certain... Wintergewitter . Operation... mehr
Menü schließen
Produktinformationen "Against the Odds: Camp.Study 1: Wintergewitter"

But if the whimper can be debated, the final "bang" is certain... Wintergewitter. Operation "Winter Storm" began as the final relief effort of surrounded Stalingrad, with a scratch Panzer Korps made up of units from all over the theater (and the strongest, 6th Panzer Division, coming back from refit in France!). Supported by already shaken Rumanian units, the force had 110 kilometers, two rivers, and two Soviet armies to cross, compounded by unusually mild early winter conditions, with as much rain as snow.

The game features different combat styles for mech/foot units, the importance of support, air and artillery operations, an attrition-based loss system and fog of war, with significant "initiative" benefits that urge both players to keep on attacking (or else...). Players will use 560 two sided counters, representing units from regiments to companies and kampfgruppen.

Four scenarios are included, from a free-wheeling introductory ("We Are Coming") to the near despair of "Hoth's Last Gasp." A full campaign scenario allows players to fight through the entire 11 days that doomed the Third Reich, while a highly valid "what if" scenario allows the use of units which were assigned to the campaign but did not arrive in time, or units which were present and could have (should have?) been used.

Wintergewitter and the ATO Campaign Study