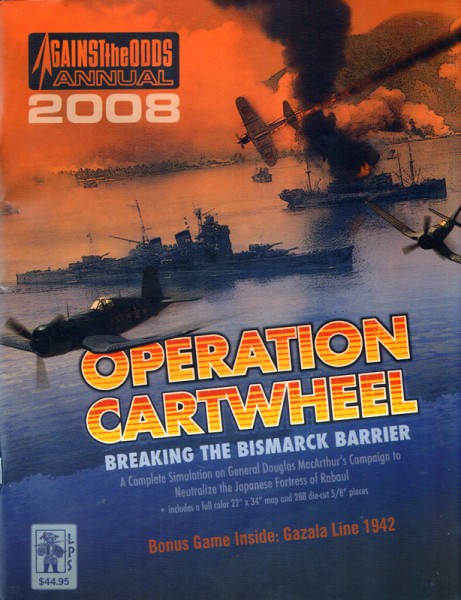 Beschreibung Bewertungen 0
Beschreibung
The Japanese “fortress” of Rabaul had 60,000 soldiers, over 350 miles of tunnels, many... mehr
Menü schließen
Produktinformationen "Against the Odds: Annual 2008 - Operation Cartwheel"

The Japanese “fortress” of Rabaul had 60,000 soldiers, over 350 miles of tunnels, many airfields, and heavy defenses of all kinds. It was the largest case of the “bypass and let them wither on the vine” strategy the Allies pursued in the Pacific. And in fact, MacArthur considered it too large to bypass...too important to leave behind. He was overruled.

Some 13 different invasions or operations were included, with flexibility for adjusting both timing and target as the situation demanded. In fact, the original goal of Cartwheel (called “Elkton” when first proposed) was the capture of Rabaul.

“Operation Cartwheel” eventually included the Battle of the Bismarck Sea, the death of Yamamoto, Bougainville, multiple parachute drops, a Japanese counter-invasion, and the leap-frogging strategy up New Guinea. It involved the top commanders on both sides, sometimes working in close harmony and sometimes at ends. (The Japanese army and navy had conflicting concepts of how to defend the area and each pursued their own ideas!) With 288 5/8" counters and a 22 x 34 inch map (each hex representing about 100 miles) Operation Cartwheel integrates separate ground, naval, and air games. Logistics is key, as it was at the time, but not a burden in game mechanics.

Against the Odds: Chennault's First Fight

For What Remains: Blood on the Rails