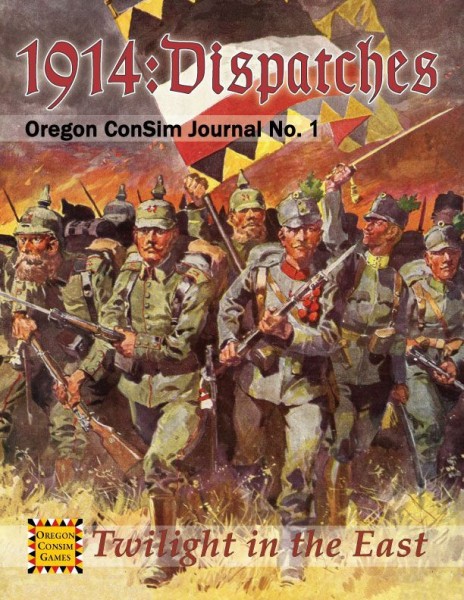 1914: Dispatches, the Oregon ConSim Journal Volume 1, is a Charles S Roberts Award winning support magazine that focuses on the Eastern Front during 1914 by expanding on the CSR Award winning WWI simulation game 1914: Twilight in the East (TitE).

During the design of 1914 TitE a great deal of research material was accumulated that was not incorporated due to space (and time) limitations. The Journal allows some of this material to be brought to light, more thoroughly covering the fascinating 1914 time period. The centerpiece of the publication is a collection of three well-researched historical articles that are paired with new scenarios allowing the subject to be accurately simulated.

The time period October–November 1914 contained two distinct campaigns that culminated in very large battles fought in Russian Poland: The Battle of Ivangorod and Battles of Lodz and Krakau. These battles are the topics chosen for two of the scenarios found in the journal. The first, “The Battle of Ivangorod,” is a small introductory scenario that covers the time period 22–26 October when the Austro-Hungarian First Army unsuccessfully fought to clear the Russians from their Vistula River bridgeheads at Ivangorod and Kozienice.

Following the Battle of Ivangorod, in early November the German high command acted to regain the operational initiative and protect Germany from the ravages of invasion. Using their excellent railroad network to transfer large bodies of troops, they launched an offensive to penetrate deep into the main Russian forces’ flank and rear. The epic operation is the subject of the Journal’s second scenario, “The Battles of Lodz and Krakau.” This expert scenario, intended for veteran players, is huge, requiring all five maps and almost the entire counter mix.

A well known military axiom states: mistakes made in the deployment of troops at the start of operations cannot be righted in the course of the whole campaign. At the outset of WWI this was true for all fronts but nowhere was it more pertinent than on the Eastern Front. The Journal’s third article, “Austria-Hungary’s Botched Deployment in 1914” concentrates on that nation’s botched initial strategic deployment.

The game strategy article Playing Both Sides in Galicia details successful opening moves on the Galician front. Based on years of gameplay experience by the designer, the article presents a corps-by-corps breakdown of Austro-Hungarian and Russian armies and offers tested solutions for the challenges they face.

Rounding out the contents are two enhanced, professionally-produced Player Aid Cards designed to speed combat resolution in 1914, Twilight in the East.