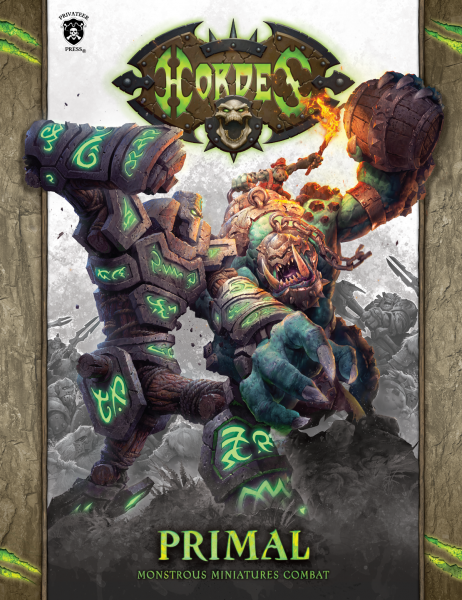 
Beyond the industrialized world, formidable factions harness the power of magic, nature, and the unnatural to vie for domination of their realms. Battle in this wilderness is waged by potent warlocks, arcane warriors who wield the savage power of their warbeasts. Their consciousness magically linked, a warlock and a horde of warbeasts possess the power of a small army. When leading an army, they are more than a match for the mightiest forces of the Iron Kingdoms.

Take control of a warlock and a horde of fierce warriors and monstrous warbeasts in this action-packed 32 mm tabletop miniatures game set in the foreboding wilds of western Immoren, home of the Iron Kingdoms.

HORDES: Primal thrusts you into this savage world with:

• Complete core rules for the game, packed with examples to illustrate key concepts.
• In-depth histories of the wild tribes and organizations of the Iron Kingdoms and the conflicts that have shaped them, from the stalwart Trollblood kriels and the enigmatic druids of the Circle Orboros to the dragon worshipers of the Legion of Everblight.
• A selection of detailed army profiles and game stats for the powerful characters, warbeasts, and soldiers to help you muster a customized army for combat.
• An instructional painting and hobby guide that will show you how to bring both your miniatures and your tabletop battlefield to life.
• A summary of the rules for WARMACHINE, the fully compatible companion game that shows the steam-powered side of the Iron Kingdoms.


SEIZE THE SAVAGE POWER OF HORDES AND UNLEASH THE FURY WITHIN!