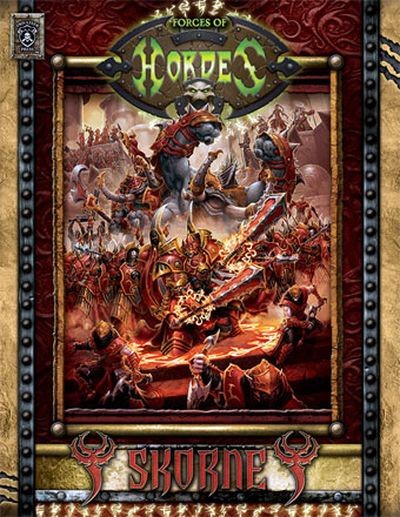 Enslave and Subjugate
From the blasted stormlands of Immoren march the vicious armies of the Skorne Empire set on the conquest of the Iron Kingdoms. Disciplined ranks of praetorians, elite cataphracts, and malicious paingivers fight alongside fearsome titans and other great warbeasts under the cruel watch of their mighty warlords. Warriors to the core, the skorne employ the dark art of mortitheurgy to push their bodies past normal limits and to fight on past death.

Lead the merciless skorne in their domination of the Iron Kingdoms with Forces of HORDES: Skorne, featuring:

• Complete faction rules and profiles for using all current Skorne models in HORDES Mk II.
• New troops to bring to the fight, plus the all-new warlock Dominar Rasheth.
• An in-depth look at the history and structure of the Skorne Empire’s military.
• A painting and modeling guide to help ready your forces for battle.
• Skorne Theme Force lists and rules, which allow you to create armies based on specialized forces from the Skorne Empire.

Go Forth and Bend All of Immoren to Your Will!