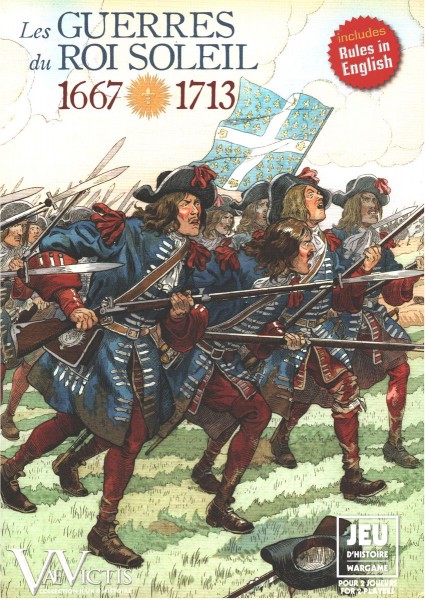 The Wars of the Sun King is the first opportunity to play, with a single set of rules, the five conflicts led by France under the reign of Louis the Great.

The War of Devolution (1667-1668) - Spain’s non-payment of the Infanta of Spain’s dowry at her marriage to Louis XIV was used as a pretext for a war of conquest. This was the first conflict initiated by Louis XIV against a militarily and economically weakened Spain.

The Franco-Dutch War (1672-1678) - France wants to bring the Dutch Republic to its knees. This fierce commercial competitor, too tolerant as a state, opposes France’s expansion toward the Spanish Netherlands. This war for glory pitches against each other living legends of the Thirty Years War like Turenne, Condé et Montecuccoli. As a result of this conflict, the King of France earns the nickname Louis the Great.

The War of the Reunions (1683-1684) - Spain does not accept the annexation by France of enclaves and surrounding areas in the Spanish Netherlands, stating their boundaries were poorly defined by the international treaties ending the War of Devolution and the Franco- Dutch War. Vauban recommends limiting the territorial enclaves, leaning against the mountainous area and securing the enclaves by constructing strongholds; it’s a matter of turf.

The War of the League of Augsburg (1688-1697) - The Habsburg’s victory against the Ottomans diverted the Empire’s attention on the French territorial gains following the War of the Reunions. In 1687, Louis XIV wanted to transform the Truce of Ratisbon into a permanent accord and proposed an ultimatum to the emperor who refused. The German princes and the great European powers form an alliance to counter France’s politics of expansionism and religious persecution. France finds itself diplomatically isolated.

Spanish War of Succession (1701-1713) - King Charles II of Spain dies with no descendants. The two principal reigning families of Europe, the Bourbons (France) and the Habsburgs (Austria), are both related to Charles II and claim the throne. The principal stake is the domination of Europe by seizing the enormous heritage of the Spanish Habsburgs. France is confronted with its fiercest military enemies: Marlborough and Prince Eugene of Savoy.

Will you be able to vanquish Montecuccoli, Eugene of Savoy or Marlborough with Turenne, Condé, Villars and impose the Sun King’s will?

• A book of rules and scenarios

No Box, an cardboard envelope instead (see product picts).

Won by the Sword - Great Campaigns of the...

Normandy - The Beginning of the End...