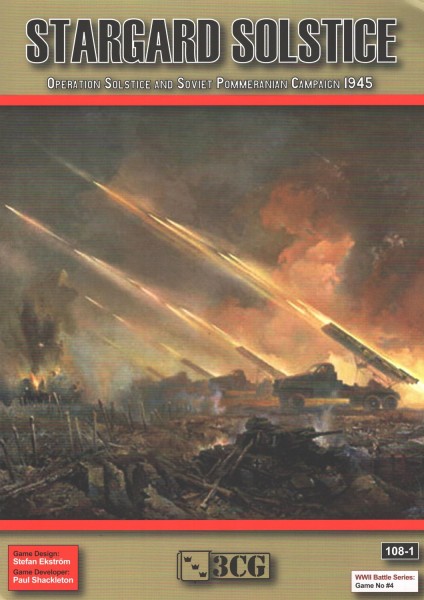 "Stargard Solstice: Operation Solstice and the Soviet Pomeranian Campaign 1945" is a wargame recreating the campaigns in Pomerania from 15th February - 6th March, 1945.

The game starts with one of the last German offensives of 1945, ‘Operation Solstice’. At the beginning German General Guderian had planned a pincer move to relieve Küstrin, but Hitler wanted to save troops to retake Budapest. This resulted in changing objectives to the relief of Festung Arnswalde and trying to cut the Soviet supply route towards Küstrin. The historical objective for the Soviets was to drive the Germans out of Pomerania and thereby protect their right flank while preparing to take Küstrin and make the final thrust towards Berlin.

Stargard Solstice™ is taught in 30 minutes and easy to digest yet a challenge even for the more experienced players.

It is built around the same system of wargaming rules that shaped Plan West, Königsberg '45 and Army Group Narwa and utilizes a Command chit-pull system to activate HQ, which in turn allow their controlled combat units to move and attack.

Note: Players will need to provide one 6-sided die for game play.

Fall of Berlin - Solitaire Game of the last...

Fall of Berlin - Solitaire Game of the last...