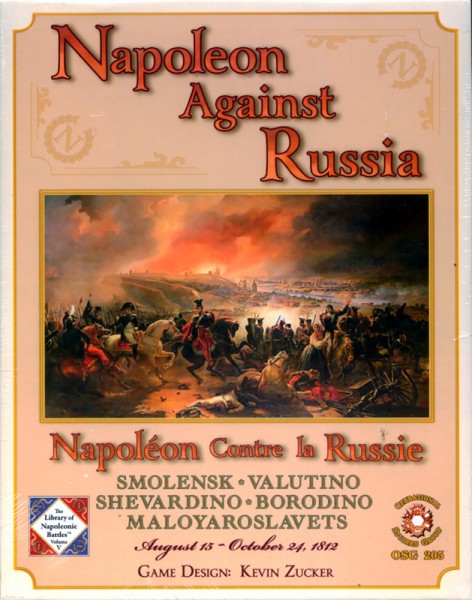 BATTLES SIMULATED
Smolensk, A Battle Postponed, 16-17 August
When he recognized that the enemy had withdrawn into the city, the Emperor´s plan was stymied. He either had to seize Smolensk on the 16th, without waiting for the arrival of the entire army, or cross the Dneiper River east of Smolensk. Instead he waited for the Russians to make a mistake, and gave them time to pull out along the Moscow road.

Valutino, Rearguard Action, 18 August
When the Russians did give him an opportunity to catch the First Army disunited after a confused night march, Napoleon had already returned to Smolensk, expecting nothing more than a rearguard action. Hence he was not on the scene to coordinate the actions of his Marshals, who, left to themselves, were unable to crystallize a victory out of the opportunity.

Shevardino, Fight for the Redoubt, 5-6 September
The preliminary battle opened with the arrival of the French cavalry who immediate attacked Konovnytsyn. On the 6th, more French forces arrived including the IV Corps and the Polish Corps. The French captured the Shevardino redoubt at a cost of 4,000 - 5,000 French and 6,000 Russian casualties.

Borodino, The Russian Army is Saved, 7-8 September
In the climactic battle, Napoleon has been criticized for making a simple frontal assault. With our large map the French player will have plenty of maneuver room to try and outflank the Russian army to the south, or even to the north. He will also have the option of attacking the north flank as Kutusov expected.

Maloyaroslavets, The Retreat Goes Awry, 23-24 October
Trying to secure a bridge over the Luzha River, the Italians of Eugene's IV Corps lost about 5,000 and the Russians about 6,000 men as the town changed hands eight times. Except for Davout, all the French marshals advocated a return to the main highway to Smolensk, through the depleted zone, a detour that doomed the Army.