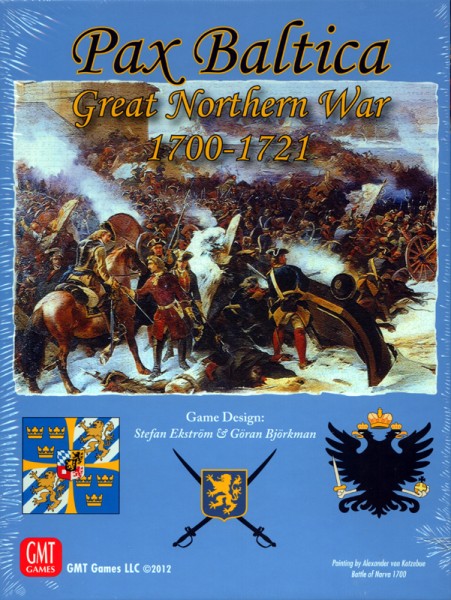 Beschreibung Bewertungen 0
Beschreibung
Three Kings conspire to once and for all break the Swedish dominance in the Baltic. Charles the... mehr
Menü schließen
Produktinformationen "Pax Baltica"

Three Kings conspire to once and for all break the Swedish dominance in the Baltic. Charles the XII of Sweden decides to attack and soon the Alliance against him begins to crack. A 21 year long bitter war has just begun which eventually ends an empire and sees another one rising…

Pax Baltica™ is a Grand Strategy Game covering the entire Great Northern War and recreates the intriguing conflict that is often considered a side-show of the War of Spanish succession. Yet the conflict probably have had greater impact on Europe’s political, cultural and social developments than the latter.

Pax Baltica™ is probably the first board game ever covering the entire Great Northern War. The game includes five different scenarios with varying playing-time of two to eight hours depending on scenario. The units in the game are high quality colored wooden blocks which give great flexibility for game play and limited intelligence. The four-color map is divided into provinces which you have to conquer in order to take control over a country and to eventually defeat the enemy. This dynamic conflict covers large parts of northern and eastern Europe. From Bremen in the West, to Smolensk in the East. From Trondheim in the North, to Bender in the South. Playable nations are Sweden, Russia, Turkey, Denmark and Saxony.

As leader of one of the great nations involved – Take command and lead your empire to victory!