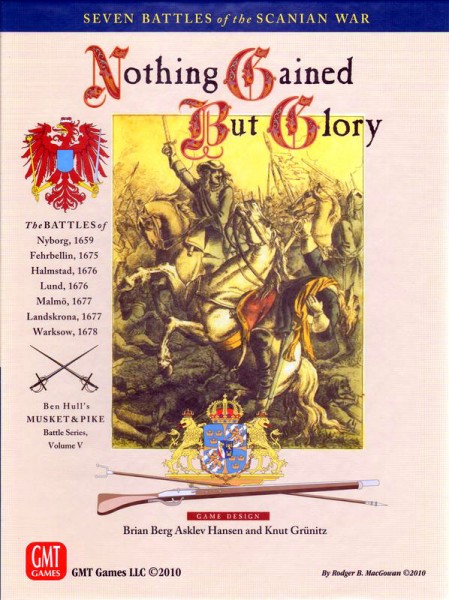 Beschreibung Bewertungen 0
Beschreibung
Nothing Gained But Glory will be the fifth volume from the award winning Musket & Pike Battles... mehr
Menü schließen
Produktinformationen "GMT: Nothing Gained but Glory"

Nothing Gained But Glory will be the fifth volume from the award winning Musket & Pike Battles Series. It features several pivotal battles in Baltic region of the late 17th century - a period where rulers struggled to centralize power in their realms and to introduce permanent standing armies instead of expensive mercenary forces. It shows the highly trained and well led army of Sweden struggling to defend its massive gains from the Thirty Years War and the Northern Wars of 1655-1661 against the forces of Denmark and Brandenburg, reinforced by contingents from Austria, the United Provinces, Münster, Hesse-Kassel and Poland.

The personalities in the game include the great Swedish warrior king Carl XI, Brandenburg´s Frederick William (the Great Elector), and King Christian V of Denmark-Norway. Never before have so many monarchs been in one M&P box!

Nearly all the scenarios in this module are smaller than the typical Musket & Pike scenarios, and thus take less time and space to play. For the same reasons it is a great introductory game to the series.

Battles for the Shenandoah: A Death Valley...