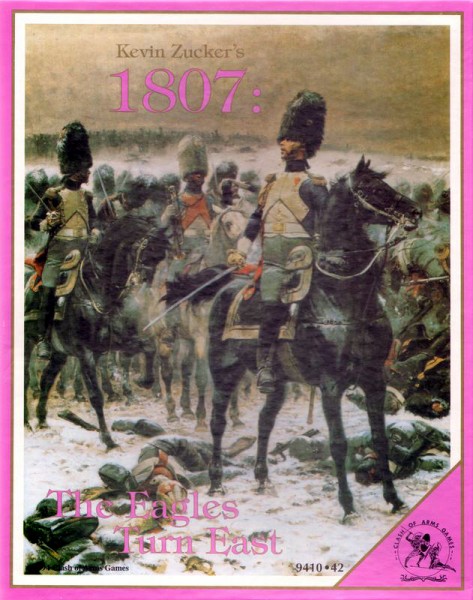 
1807 - The Russians have abandoned Warsaw with the French in hot pursuit. Murat leads a triumphal entry into the ancient capital. Napoleon knows that he is 400 leagues from Paris and on the threshold of a hard, eastern European winter, but he must have the opposite bank of the Vistula River if the campaign to be launched in the Spring is to have the best chance of success. He orders Lannes to cross over....

Those who have made a study of valor and glory know whereof names such as Poltusk and Golymin speak. They know that in 1807 the Eagles stained with their own blood the snows of East Prussia around the village of Preussisch-Eylau, and that they soared highest on the banks of the Alle, above the town of Friedland. Comrades, as the Eagles turn, shall we not follow?

Kevin Zucker expands his award winning series to include Napoleon's three campaigns in Poland; Poltusk-Golymin, Eylau and Friedland. The game runs from the fall of Warsaw in December, 1806, through the signing of the Treaty of Tilsit in July, 1807. A time which saw Napoleon and his Grande Armée reach the zenith of their combined power and glory.

for additional hours of enjoyment.

Vol. II of 'The Campaigns of Napoleon' series (The Emperor Returns, 1994, is Vol. I) including scenarios and campaign games for three campaigns in Poland: Pultusk-Golymin, Eylau and Friedland.