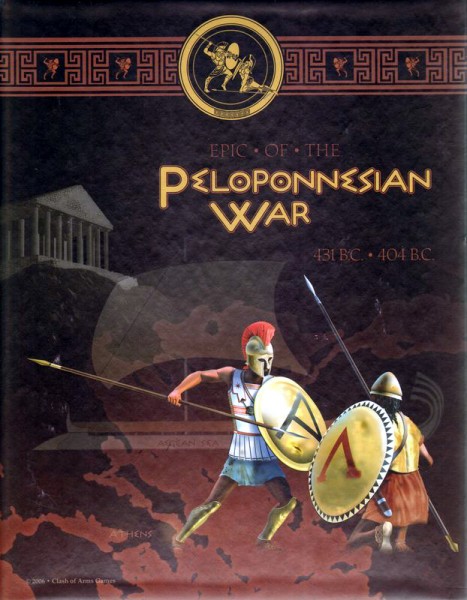 Beschreibung Bewertungen 0
Beschreibung
From Clash of Arms: In the year 431BC, the Greek world was dominated by the Athenian... mehr
Menü schließen
Produktinformationen "Epic of the Peloponnesian War - 431 B.C. - 404 B.C"

In the year 431BC, the Greek world was dominated by the Athenian Empire, due to their naval supremacy of the Aegean. Only the Spartans dared to challenge their might through the strength of their unsurpassed Hoplite troops. The result was a 30-year conflict that ended in the destruction of Greek dominance in the ancient world.

Two to four players use military force and political influence in their struggle to control the city-states of ancient Greece. Playing time ranges from 4-10 hours for short scenarios, to 20+ hours for the full campaign game, as players mobilize forces four times a year, and deploy them three times each season. As the leader of the Athenian Empire, can you save Athens' glory from the Spartan onslaught? As the leader of the Peloponnesian League, can you free Greece from Athenian tyranny without destroying it in the process?

Players have a full range of strategic options, including sieges, constructing and destroying fortifications, razing enemy cities, foraging and raiding. Event Cards provide both random events (such as storms at sea, bad omens, the crippling plague at Athens, etc.) and strategic targets (city betrayals, rebellion of Athenian regions, Persian support, the Sicilian Expedition, among others).

Expansion (not a complete Game), Ziplock

MMP: ASL For King and Country