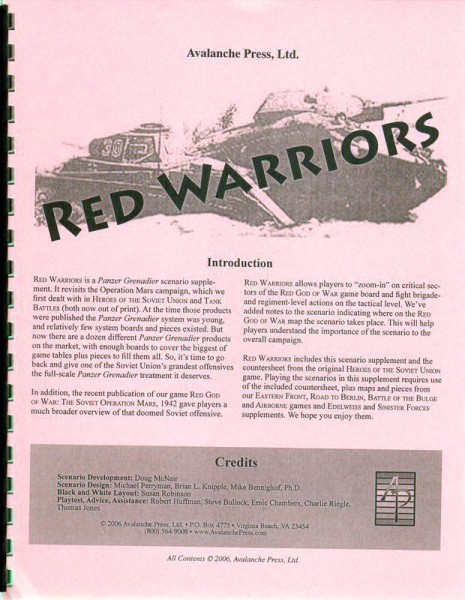 Crushed by the initial Nazi onslaught, the Red Army reeled back across hundreds of miles. But as resistance stiffened, it became clear that some highly-motivated units fought better than others. These became the Guards, first named in September 1941. They became the Red Army’s best troops, with better training, equipment and pay than the regular army.

Red Warriors is a supplement to the Panzer Grenadier series, focusing on these elite fighters and their exploits. It is not playable by itself, but requires ownership of Eastern Front, Road to Berlin and Battle of the Bulge to play all of the scenarios.
While the Soviet Guards are of excellent quality, the supplement also includes German Air Force (Luftwaffe) ground troops of rather dubious merit, plus German Army forces.
Scenarios cover actions of these units in the first two years of the Great Patriotic War, many of them focused on the Soviet Operation Mars, also the subject of our Red God of War game at the operational scale. This supplement lets you explore the same battle at a more detailed level.

The pieces and half of the scenarios appeared in our Heroes of the Soviet Union game, released in 2001 and long since retired to Valhalla. Each scenario from the older game has been completely revised to make use of the many boards and pieces we’ve published since they first appeared. Each scenario is fully laid out on its own scenario card rather than the booklet used in most of our games.

Heroes of Normandy - The Untold Stories...

Expansion (not a complete game), Ziplock

Heroes Against the Red Star X-Maps