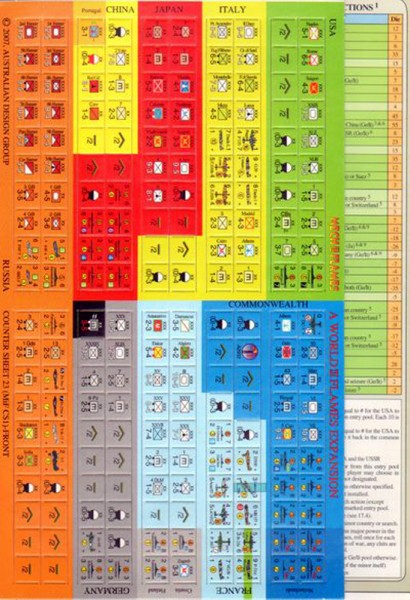 2. All Commonwealth Set Ups: Where any World in Flames set-up (see WiF 24) instructs the Commonwealth to set up a C-47, they instead set up any available Commonweath ATR (chosen randomly).

4. MiF Ships: All naval units are available to be built from the year they become available. The Japanese replacement carriers are alternatives to those provided in Ships in Flames. Japan can replace the Japanese battleships with either the SiF or MiF (historical) ones, not both.

The Commonwealth World War I monitors (Roberts if playing Classic WiF, or the Terror and Erebus if playing with Ships in Flames) set up in the United Kingdom in all scenarios involving the Western European map. They are removed from play in all other scenarios. Furthermore in all scenarios starting after Sep/Oct 1941, the Terror is no longer available (this was the turn she was sunk). The other 2 monitors are placed in the construction pool in Western European scenarios commencing the calendar year following the monitors available date, and on the map in the United Kingdom in all Western European scenarios commencing two or more calendar years after.

Fortress Europa - The Allied Campaign Across...