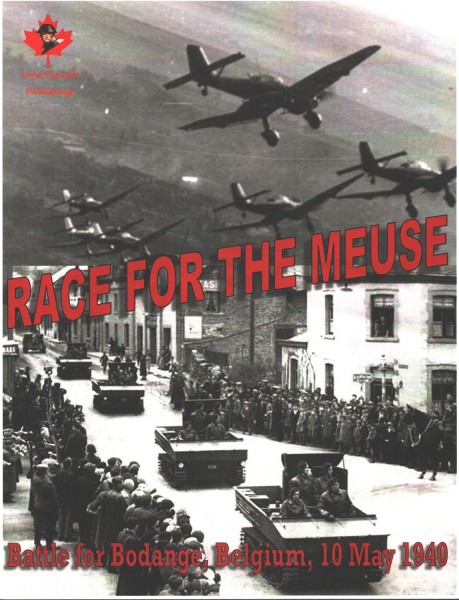 A Tactical Mission (TM) Pack with 1x Tactical Mission (a.k.a. Campaign Game) + 5 Scenario played on a historically based (24½"x 35"with standard ASL 7/8" hexes) map of the Sure River Valley; between the villages of Wisembach and Bodange, located 3-kilometres west of the Belgian-Luxembourg border.

In the early morning hours of 10 May 1940, a single code-word “Danzig” was transmitted to German forces and at 04:30 hours, German panzers rumbled westward across the border into the Low Countries, heralding the start of the Blitzkrieg in the West. Without encountering significant obstacles, the reconnaissance elements of the 1.Panzerdivision raced across Luxembourg, crossing the 50 kilometres, even before the inhabitants were awake, and reaching the Belgian frontier at Martelange at 07.45 hours. The German plan foresaw an attack on Martelange by Marschgruppe Voraus – a motorcycle company supported by armoured cars - then an attack on Bodange by the entire Advance Guard.

This TM revolves around the efforts of the Belgian 5th Company, 1er Regiment de Chasseurs Ardennais'  valiant attempt to slow the Germans' Race for the Meuse River. This TM is compatible with MMP's ASL™ System and modifiable to be used with other miniature Wargaming systems.

RM-1 Wisembach, Belgium: Driving along the main road, south of the river, and the railroad tracks on the north bank, elements of the 1.Kradschützen-Kompanie, pushed towards of Bodange. Southeast of Bodange, German motorcyclist turned at Wisembach to attempt an approach from the south. At Wisembach, Sergeant Renauld of the 1er Régiment de Chasseurs Ardennais, having watched the destruction of the bridge across the Sûre River earlier that morning, now waited for the approaching Germans

RM-2 Stein Hill, Belgium:  In preparation for an assault on Bodange, the leading elements of 1.Panzerdivision moved to flank the village from both the north and the south. The southern flank was exploited after the earlier attack that cleared the back road from Wisembach. Continuing on, the Kradschützen-Kompanie of the Aufklärungs-Abteilung 4 pushed onto Stein Hill. Chasseurs Ardennais pulling back from Wisembach fought a stubborn action to deny the high ground to the Germans.

RM-3 Bodange, Belgium: Throughout the morning, Belgian resistance, roadblocks, demolitions, and the confined roads of the Ardennes played havoc with the German advance. Despite these problems, by mid-afternoon German forces were finally in position to attack across the Sûre River. The Belgians of 5th Company, 1er Régiment de Chasseurs Ardennais armed with machine-guns and well protected in stone-walled buildings near the centre of the village, were ready for a fierce fight.

RM-4 Bodange, Belgium: At 13:00 hours, Major Bricart, the commanding officer of the 5th Company, received orders for the 1er Régiment de Chasseurs Ardennais to hold their positions in Bodange for as long as possible. Shortly after 14:00 hours, the position on Stein Hill fell and German forces were beginning to encircling the village to the north and the south. At his command post just outside of Bodange on the road to Fauvillers, Major Bricart waited for an order to withdraw his company.

RM-5 Bodange-Wisembach Valley, Belgium: The BIG scenarios of the module, for those who don't want to play the Tactical Mission (Campaign Game), this scenario covers the entire map.

Lone Canuck ASL: The Battle of Königsberg - The...