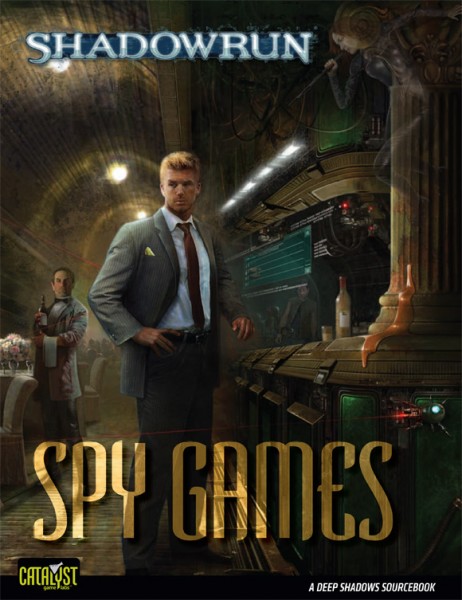 Listen to the whispers—they’re all over town. People have secrets, millions of secrets, and some of them are so explosive they could shift the balance of power in the Treaty City of Denver. Normally, the great dragon Ghostwalker’s tight grip would keep the city under control, but some of the whispers moving around town say that Ghostwalker hasn’t been himself lately. The powers of Denver are scrambling, the Treaty is about to be renegotiated, and information is the hottest commodity in town.

Spy Games brings Shadowrun players to the espionage-filled city of Denver, where secrets are bought and sold, and sometimes the price is paid in blood. Accessing these secrets may mean using cutting-edge surveillance gear or powerful magic, or it could mean turning back the clock and breaking out low-tech cloak-and-dagger approaches that the techheads of the world would never expect. Spy Games provides the setting information, gear statistics, and game rules players need to dive into Sixth World spycraft.

Related links to "Shadowrun: Spy Games"
Evaluations 0
Read, write and discuss reviews... more
Close menu
Customer evaluation for "Shadowrun: Spy Games"
Write an evaluation
Evaluations will be activated after verification.
Customers also viewed
Customers also viewed
Viewed
This website uses cookies, which are necessary for the technical operation of the website and are always set. Other cookies, which increase the usability of this website, serve for direct advertising or simplify interaction with other websites and social networks, will only be used with your consent.
Decline Accept all Configure