Just check out our new MMP- and Compass Games- pre-orders with a discount of 10%! ;)
Cookie preferences
This website uses cookies, which are necessary for the technical operation of the website and are always set. Other cookies, which increase the comfort when using this website, are used for direct advertising or to facilitate interaction with other websites and social networks, are only set with your consent.
Configuration
Technically required
These cookies are necessary for the basic functions of the shop.
"Allow all cookies" cookie
"Decline all cookies" cookie
CSRF token
Cookie preferences
Currency change
Customer recognition
Customer-specific caching
Individual prices
PayPal payments
Selected shop
Session
Comfort functions
These cookies are used to make the shopping experience even more appealing, for example for the recognition of the visitor.
Note
Statistics & Tracking
Affiliate program
Track device being used
Categories
Information 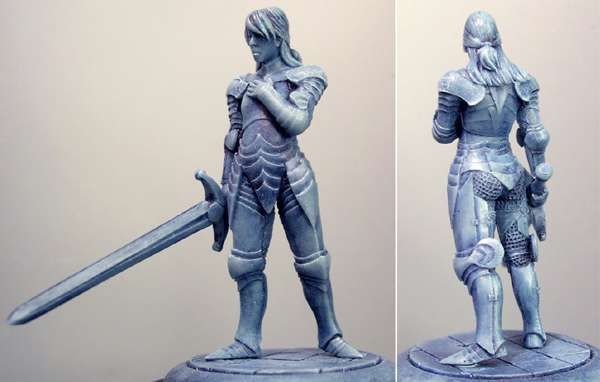 Tiriel in 28 mm was one of the first HF figures ever released in 2004 and still remains popular today. This version is in 40mm scale and the combination of the extra height plus the crisp resin casting shows perfectly the fine details that Kev was unable to capture in 28mm scale.

Cast in HF blue/grey resin, she is an excellent piece for painting with those clean armour lines but will also look lovely just assembled and put into a display cabinet (if you can't face painting her!). Tiriel is being used by many gamers who are either using her as a statue in a 28mm scale game or a figurehead for some of the 40mm skirmish games that are currently growing in popularity. She comes as three pieces...body, sword arm plus base.

Related links to "Tiriel. 40mm Resin"
Evaluations 0
Read, write and discuss reviews... more
Close menu
Customer evaluation for "Tiriel. 40mm Resin"
Write an evaluation
Evaluations will be activated after verification.
Customers also viewed
Customers also viewed
Viewed
This website uses cookies, which are necessary for the technical operation of the website and are always set. Other cookies, which increase the usability of this website, serve for direct advertising or simplify interaction with other websites and social networks, will only be used with your consent.
Decline Accept all Configure