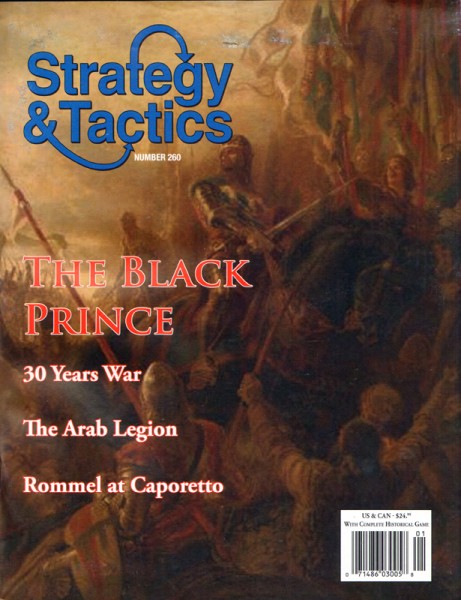 The diversity of doctrines, weapons, training methods and leadership in medieval armies was a function of the geographic and cultural diversity in which those armies originated. Consequently, many military systems developed along divergent lines until the time of the widespread use of gunpowder, which dominated Renaissance warfare. Black Prince: Crecy & Navarette (BP) reflects that diversity by simulating two battles, both of which represented a clash of distinct weapons and tactics. Navarette is a simulation of the conflict between English and Castilian forces and their French allies near the Spanish village of Najera on 3 April 1347, during the Hundred Years War. The battle marked the culmination of the Black Prince’s campaign to overthrow the usurper Henry the Bastard and regain the throne of Castille for the rightful king, Pedro the Cruel. The scales are 50 yards per hex, 500 men per standard counter, 1,500 per double-length counter, and 20 minutes per game turn.

Related links to "Strategy & Tactics# 260 - Crecy & Navarette"
Evaluations 0
Read, write and discuss reviews... more
Close menu
Customer evaluation for "Strategy & Tactics# 260 - Crecy & Navarette"
Write an evaluation
Evaluations will be activated after verification.
Customers also viewed
Customers also viewed
Viewed
This website uses cookies, which are necessary for the technical operation of the website and are always set. Other cookies, which increase the usability of this website, serve for direct advertising or simplify interaction with other websites and social networks, will only be used with your consent.
Decline Accept all Configure