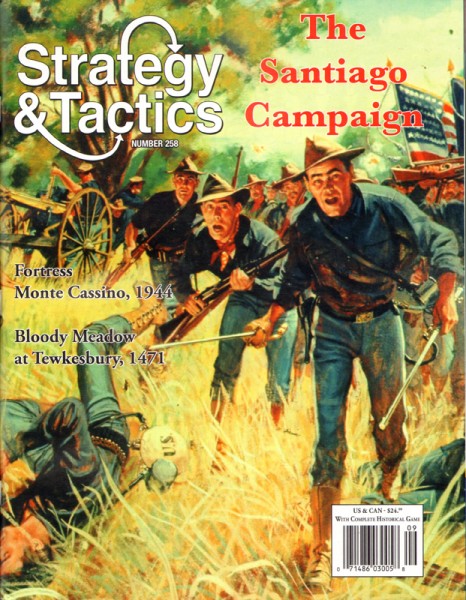 The Santiago Campaign, 1898 (TSC) is a low-complexity, two-player, operational-level simulation of the US campaign to capture the Cuban port of Santiago during the Spanish-American War, designed by Ron Bell. Solitaire play is also doable, provided the player is willing to ‘fudge’ the concealed Spanish units rule. The US player controls all American and Cuban units; his opponent controls the Spanish units.The scale on the 34x22” large-hex map is a half-mile (0.8 km.) per hex. Each full game turn represents three days. The 98 large-size iconic units of maneuver for both sides are infantry battalions and regiments, each representing between 250 and 1,000 men; along with artillery batteries, each with two to four guns; and groups of Cuban insurrectionists, each representing up to about 500 men. The counter-sheet also includes a 78-unit expansion set for Red Dragon Rising, which appeared in issue 250.Special rules cover: truces, fever, the US observation balloon, black powder, smokeless powder, feeding the civilians, lack of cooperation between the US naval and army commands, lack of tactical intelligence, uncertain US supply, variable landing areas, Gatling guns, harbor fortresses, artillery overrun, Teddy Roosevelt, naval bombardment, Guantanamo Bay, and combat engineers.

Related links to "Strategy & Tactics# 258 - The Santiago Campaign"
Evaluations 0
Read, write and discuss reviews... more
Close menu
Customer evaluation for "Strategy & Tactics# 258 - The Santiago Campaign"
Write an evaluation
Evaluations will be activated after verification.
Customers also viewed
Customers also viewed
Viewed
This website uses cookies, which are necessary for the technical operation of the website and are always set. Other cookies, which increase the usability of this website, serve for direct advertising or simplify interaction with other websites and social networks, will only be used with your consent.
Decline Accept all Configure