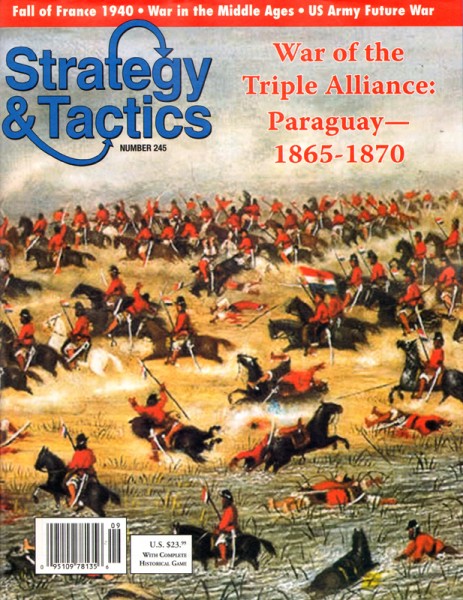 The Triple Alliance War (TAW) is a two-player, low-to-intermediate complexity, strategic-level simulation of the second-largest war ever fought in the New World (the largest having been the American Civil War). The Paraguayan player is attempting to hold off the onslaught of three allied nations: Argentina, Brazil and Uruguay. The Allied player is generally on the offensive, attempting to win the game by invading Paraguay and seizing key areas on map within that country. The Paraguayan player is primarily on the defensive, but the situation also allows for his prosecution of offensives, particularly in the early stage of the war.

Game play encompasses the period that began historically in 1865 with the Paraguayans launching a pre-emptive strike into Argentine territory. The game ends during the first half of 1868 when, historically, the Allies broke through the Paraguayan river forts and went on to seize their capital. That advance signaled the ultimate doom of the Paraguayan cause and, though the war officially went on for another year and a half, that portion of it was more a rebellion-and-occupation struggle than an actual war.

In Hoc Signo Vinces, The Campaign for Rome:...

€26.95 *
Viewed
This website uses cookies, which are necessary for the technical operation of the website and are always set. Other cookies, which increase the usability of this website, serve for direct advertising or simplify interaction with other websites and social networks, will only be used with your consent.
Decline Accept all Configure