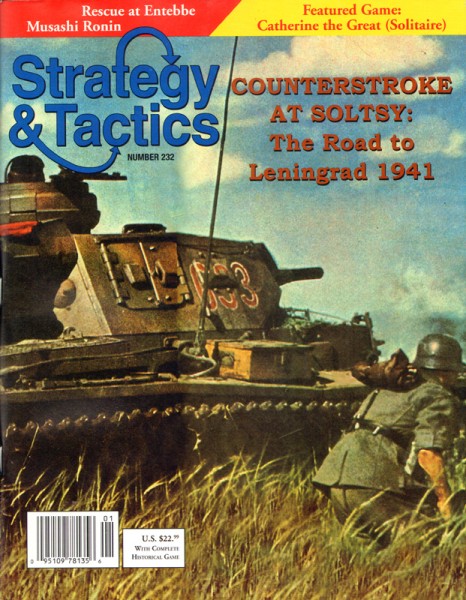 Catherine The Great is a purposed-designed solitaire wargame of the expansion of the Russian Empire under Empress Catherine II (1762-96). The player purposefully conducts the affairs of the Russian Empire and its allies, while the game system does the same for the anti-Russian coalition made up of a shifting alliance of powers.

Central to play of the game are its 'policy cards.' They trigger various strategies, powers at war, and other events that shape the general course of play. Policy cards are activated in one of two ways: the Empire player can choose which policies he will activate, while coalition policies are activated by the draw of markers. The Empire player may move his forces freely. The game system moves coalition forces according to a schedule of precedence.

While Catherine the Great has been purpose-designed to be a solitaire game, more than one can play at the same time as part of a Russian Empire command team. Player's can divvy up responsibilities as they please for different parts of the Russian Empire, with the most veteran gamer taking the role of Czar and deciding who gets what resources.

Blitzkrieg Checked: The Battle of Gembloux, 1940

Victory - The Blocks of War

The Battle of Stalingrad

Strategy & Tactics# 271 - Second Battle of Kharkov
€28.00 *
Viewed
This website uses cookies, which are necessary for the technical operation of the website and are always set. Other cookies, which increase the usability of this website, serve for direct advertising or simplify interaction with other websites and social networks, will only be used with your consent.
Decline Accept all Configure