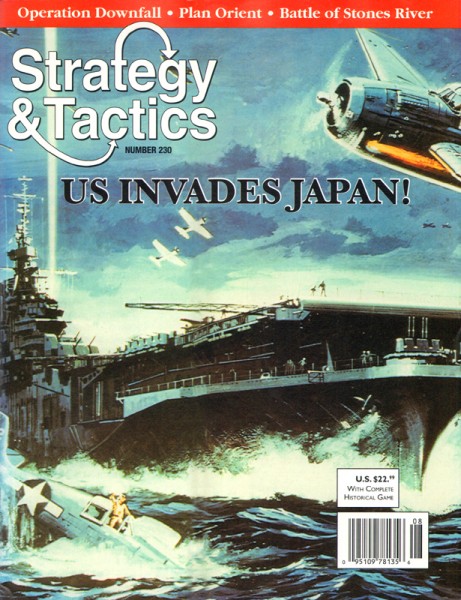 Downfall (DF), is a wargame simulating the planned but never executed US invasion of the Japanese home island of Kyushu during the last quarter of that year. The design combines factual historical detail with educated guesswork to produce an alternative history simulation covering the period from X-Day +1 through X-Day +30. One player acts as the overall commander of the Allied invasion effort; the other takes the role of the leader of the Japanese defense force. The burden of attack is generally on the American, but both players attempt to win by controlling key terrain on the island and destroying opposing forces. A complete game of DF takes from two to four hours to complete and it's suitable for solitaire play.

Related links to "Strategy & Tactics# 230 - US Invades Japan 1945"
Evaluations 0
Read, write and discuss reviews... more
Close menu
Customer evaluation for "Strategy & Tactics# 230 - US Invades Japan 1945"
Write an evaluation
Evaluations will be activated after verification.
Customers also viewed
Customers also viewed
Viewed
This website uses cookies, which are necessary for the technical operation of the website and are always set. Other cookies, which increase the usability of this website, serve for direct advertising or simplify interaction with other websites and social networks, will only be used with your consent.
Decline Accept all Configure