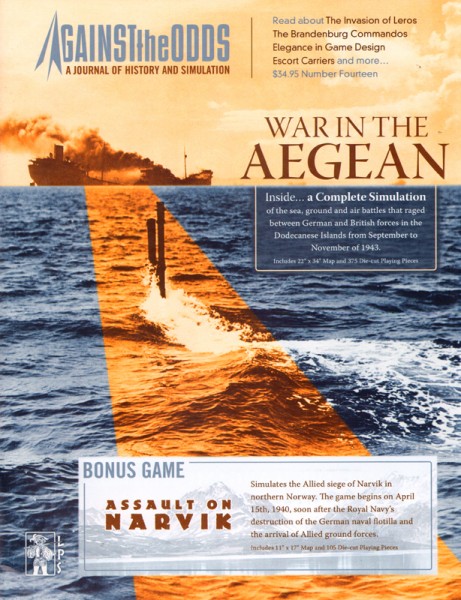 War in the Aegean is a simulation of the sea, ground and air battles that raged in the Dodecanese Islands from September to November 1943. With the confusion surrounding the surrender of Italy, seizing those islands struck Churchill as easy pickings, with a vast potential for future Allied operations. A single British brigade, the 234th, began a bold island hopping campaign. In time, the Germans countered and checked the advance, first at the island of Kos, and then later at Leros. The war in the Aegean highlighted a clash of weapons systems, with the Luftwaffe controlling the air while the Royal Navy dominated the seas.

Also included in this issue is a bonus mini-game on Narvik, 1940. Gamers can take both games and compare just how much each side learned about amphibious operations in the three years that separated the two battles.

War in the Aegean and issue #14 of ATO

Vae Victis 144 - The Eagles of the Danube

Doomtown Reloaded - Too Tough To Die

Doomtown Reloaded - Hell's Comin' With Me

Doomtown Reloaded - Out For Blood

Doomtown Reloaded - There Comes A Reckoning