Either pick up your order via "Click & Collect" or simply shop with a negative test result!
Cookie preferences
This website uses cookies, which are necessary for the technical operation of the website and are always set. Other cookies, which increase the comfort when using this website, are used for direct advertising or to facilitate interaction with other websites and social networks, are only set with your consent.
Configuration
Technically required
These cookies are necessary for the basic functions of the shop.
Allow all cookies
Amazon Pay
CSRF token
Cookie preferences
Currency change
Customer recognition
Customer-specific caching
Decline all cookies
Individual prices
Selected shop
Session
Comfort functions
These cookies are used to make the shopping experience even more appealing, for example for the recognition of the visitor.
Note
Statistics & Tracking
Affiliate program
Track device being used
Categories
Information 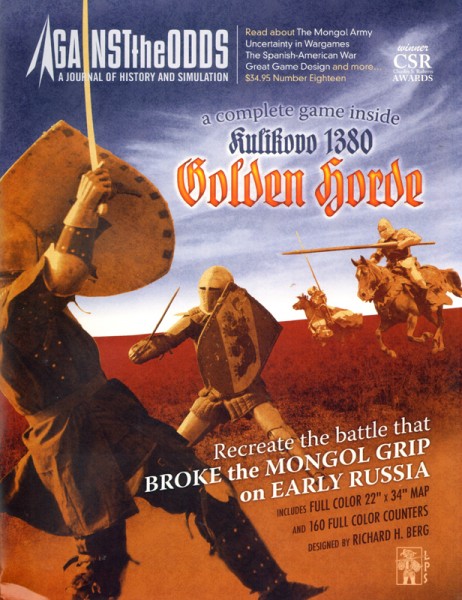 Description Evaluations 0
Description
Kulikovo 1380 is a game covering the battle between the Golden Horde clan of Mongols and the... more
Close menu
Product information "Against the Odds: The Golden Horde"

Kulikovo 1380 is a game covering the battle between the Golden Horde clan of Mongols and the collected principalities that we know as Russia under the growing leadership of Muscovy, and the Grand Prince of Moscow, Dmitri Ivanovich, later entitled Donskoi for his victory at Kulikovo (which is right near the Don River). For 150 years, Tartar armies had readily destroyed all Russian opposition, and Kulikovo was the first sign that Russia was starting to emerge from Tartar domination. It would take several centuries more.

Kulikovo is considered a major turning point/battle of the Middle Ages, in that it not only showed that a western-style, "heavy" army could defeat the Mongols, but it was also the first major step in the unification of the various Russian principalities under the leadership of Muscovy. Kulikovo 1380 is an accessible, fast-playing, fun game of low complexity. Gamers who have played ATO's Suleiman the Magnificent (ATO #9) and/or GMT Games' Men Of Iron should find all of this quite familiar.

Related links to "Against the Odds: The Golden Horde"
Evaluations 0
Read, write and discuss reviews... more
Close menu
Customer evaluation for "Against the Odds: The Golden Horde"
Write an evaluation
Evaluations will be activated after verification.
Customers also viewed
Customers also viewed
Viewed
This website uses cookies, which are necessary for the technical operation of the website and are always set. Other cookies, which increase the usability of this website, serve for direct advertising or simplify interaction with other websites and social networks, will only be used with your consent.
Decline Accept all Configure