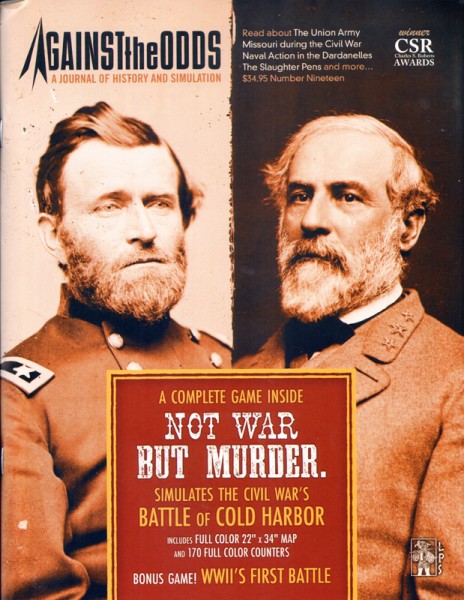 But it was not so easy on the other side. While one CSA staffer called it "perhaps the easiest victory ever granted to Confederate arms by the folly of Federal commanders," from Lee's point of view, anything could happen. His army had "not a regiment" in reserve, and the volume of sound -- "It seemed more like a volcanic blast than a battle," -- rattled windows all the way back in Richmond.

Not War But Murder, by designer Michael Rinella, is his newest area-map game, and his first take on an American Civil War battle. This game includes one 22" by 34" inch area map, 170 5/8" counters, and 12 pages of rules that include designer notes, and optional rules. It also marks the debut of what Rinella calls the "diceless advantage". In previous area-impulse games, from Monty's Gamble all the way to the Avalon Hill games of the early 1990s, an "advantage chit" allowed the person holding it to re-roll an single die roll (or rolls if it was a combat). In NWBM this changes. The player may spend the advantage to gain specific game benefits, automatically. Thus, rather than being hoarded, this "twist of fate" is likely to hop back and forth, as each player strives to save a desperate situation.

Not War But Murder and issue #19 of ATO

AP: Bitter Victory: Sicily 1943
€19.95 *
Viewed
This website uses cookies, which are necessary for the technical operation of the website and are always set. Other cookies, which increase the usability of this website, serve for direct advertising or simplify interaction with other websites and social networks, will only be used with your consent.
Decline Accept all Configure