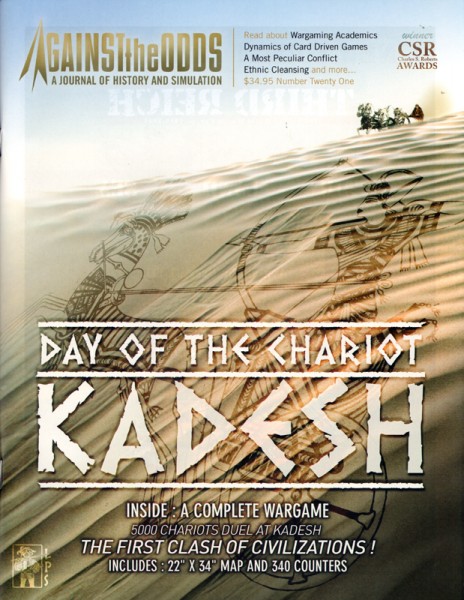 As an early example of "spin," Egyptian pharaoh Ramses II claimed a tremendous victory and the total vanquishing of the Hittite army... although he also signed a peace treaty that left the disputed city of Kadesh in the hands of the Hittites and never returned. Hmm. (A later and more formal treaty between Ramses and the next Hittite king is reproduced on the walls of the United Nations, as one of the first recorded international peace treaties. Ramses did not get Kadesh with that one either.)

Now you can take the reins and lead your lines/lions into battle. Day of the Chariot: Kadesh offers a classic design by Gene Dickens fully updated into a tactical view of one of the most-discussed battles of middle eastern history, with 340 double-sided counters, 30 minute turns, and everything you need to play a system emphasizing command control and flexibility (or the lack thereof). Three distinct scenarios provide the battle that did happen (according to Ramses), the battle that both sides had "prearranged" to happen, and the smaller, more confused battle that historians think actually did happen. (You may be surprised how different the "same" battle can be!)

Day of the Chariot: Kadesh and issue #21 of ATO

Hold the Line American Civil War
€85.00 *
Viewed
This website uses cookies, which are necessary for the technical operation of the website and are always set. Other cookies, which increase the usability of this website, serve for direct advertising or simplify interaction with other websites and social networks, will only be used with your consent.
Decline Accept all Configure