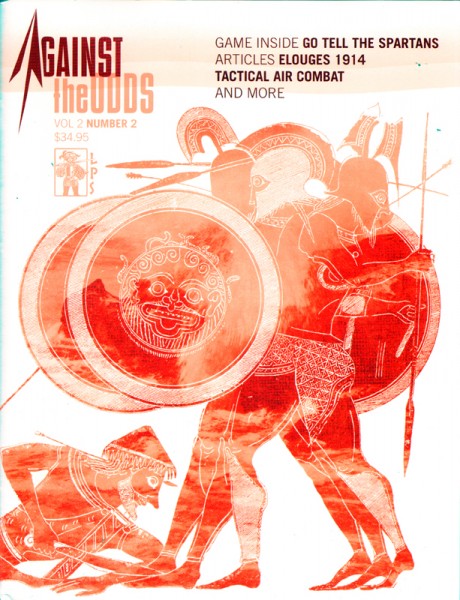 Few battles in history seem as “against the odds” as the tale of “300 Spartans” against a Persian host that some say neared a million soldiers.

If the actual numbers of Persians are more like 200,000, and if there were something like 7000 Greek warriors originally manning “the Hot Gates” of Thermopylae, it still represents an epic moment of history that has captured the imagination for centuries.

Against the Odds originally offered its first version of this battle back in ATO #6. Long out-of-print, we are excited to offer what is more of an “advanced upgrade” than a simple reprint. Exciting new graphics and larger counters, plus thoroughly polished rules make this game a joy to discover.

Go Tell the Spartans is often thought of as a solitaire game—and it’s excellent for that—but many gamers found the 2-player version challenging to both sides. Now, you can try both styles, and see whether it’s Greeks or Persians who have a story to tell.

Go Tell the Spartans and issue #6 of ATO

Related links to "Against the Odds: Go Tell the Spartans"
Evaluations 0
Read, write and discuss reviews... more
Close menu
Customer evaluation for "Against the Odds: Go Tell the Spartans"
Write an evaluation
Evaluations will be activated after verification.
Customers also viewed
Customers also viewed
Viewed
This website uses cookies, which are necessary for the technical operation of the website and are always set. Other cookies, which increase the usability of this website, serve for direct advertising or simplify interaction with other websites and social networks, will only be used with your consent.
Decline Accept all Configure