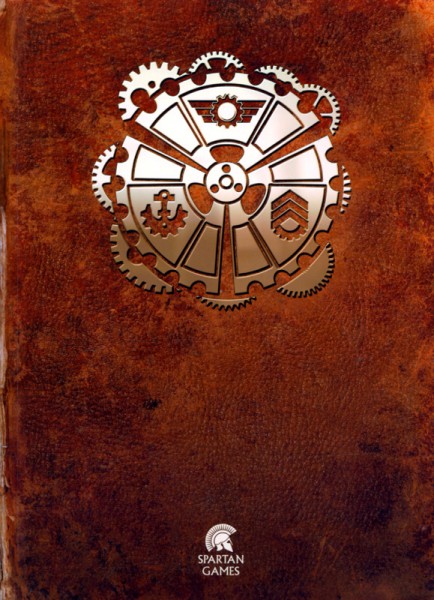 Welcome to the exciting world of Dystopian Wars 2.0, a miniatures game that brings the thrilling genre of Victorian Science Fiction to life on your tabletop. Imagine a world where science and technology has developed in a time-stream vasty different to our own. A world where the major military powers now command devasting Naval Dreadnoughts, gargantuan Robots, hulking Land Ships and gaint, flying War Robots.

These rules are designed to ensure a fast, fun and furious game using our massive selection of high quality, highly detailed 1/1200th scale models. This book supports Naval, Aerial and Land combat from the outset, allowing you to set up battles and scenarios in any combat arena. Dystopian Wars is ideal for large scale battles, so you can get as many miniatures on the table as you desire, and still finish an enjoyable game in just a few hours.

Choose from such nations as the Kingdom of Britannia, Federated States of America, Republique of France, Russian Coalition, Empire of the Blazing Sun, Prussian Empire and the Covenant of Antarctica. You will lead one of these great imperial powers to battle, but do you defend your territories from foreign incursion, or strike out the conquer the world? The choice, commander, is yours...

Related links to "Spartan Games Dystopian Wars - Rules 2.0 Admiral Edition"
Evaluations 0
Read, write and discuss reviews... more
Close menu
Customer evaluation for "Spartan Games Dystopian Wars - Rules 2.0 Admiral Edition"
Write an evaluation
Evaluations will be activated after verification.
Customers also viewed
Customers also viewed
Viewed
This website uses cookies, which are necessary for the technical operation of the website and are always set. Other cookies, which increase the usability of this website, serve for direct advertising or simplify interaction with other websites and social networks, will only be used with your consent.
Decline Accept all Configure