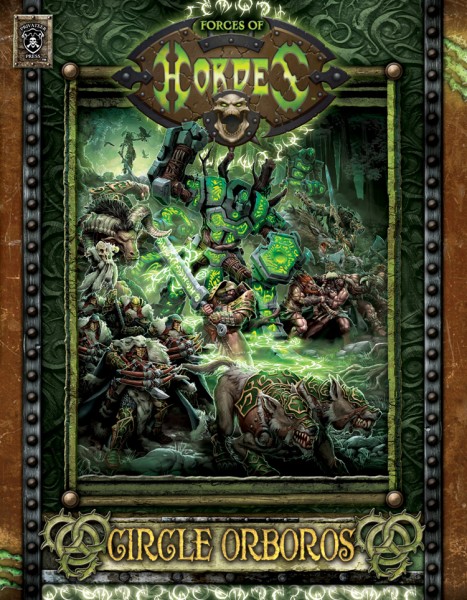 The Power of Stone and Storm
The Circle Orboros is humanity’s most ancient organization, composed of powerful mystics who watch over natural places seeped in ancient power. While few in number, these druids wield boundless power of nature and can call upon savage beasts such as ferocious warpwolves and satyrs that stalk the forest as well as armies of human Wolves of Orboros and inhuman tribes of bloodthirsty Tharn. The most powerful druids can even shape stone into mighty fighting constructs called wolds. Where the Circle walks all should fear to tread, lest the power of Orboros be brought against them.

Learn the secrets of this powerful and ancient organization with Forces of HORDES: Circle Orboros, featuring:

•Complete faction rules and profiles for using all current Circle Orboros models in HORDES Mk II.
•New troops to bring to the fight, plus the all-new warlock Cassius the Oathkeeper and his companion solo Wurmwood, Tree of Fate.
•An in-depth look at the history and structure of the Circle Orboros.
•A painting and modeling guide to help ready your forces for battle.
•Circle Orboros Theme Force lists and rules, which allow you to create armies based on specialized forces from the Circle of Orboros.

Unleash the Wrath of Nature on the Foes of Orboros!

Related links to "Forces of Hordes: Circle Orboros (SC)"
Evaluations 0
Read, write and discuss reviews... more
Close menu
Customer evaluation for "Forces of Hordes: Circle Orboros (SC)"
Write an evaluation
Evaluations will be activated after verification.
Customers also viewed
Customers also viewed
Viewed
This website uses cookies, which are necessary for the technical operation of the website and are always set. Other cookies, which increase the usability of this website, serve for direct advertising or simplify interaction with other websites and social networks, will only be used with your consent.
Decline Accept all Configure